Dorothy Solinger ─ When Central Orders and Promotion Criteria Conflict: Implementation Decisions on the Destitute in Poor Versus Prosperous Cities 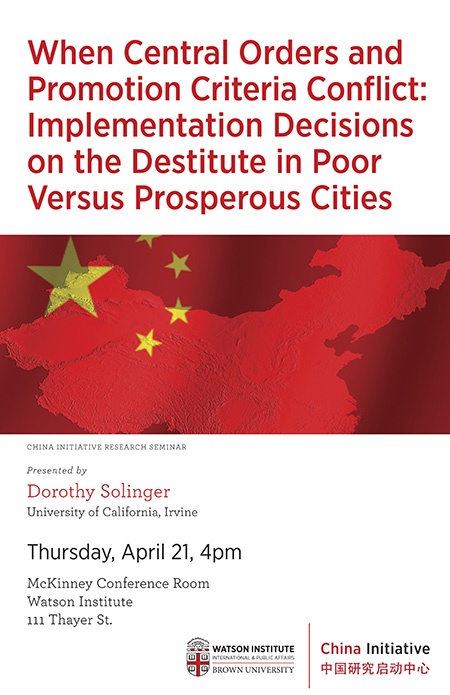 The 1999 relief plan for China’s Minimum Livelihood Guarantee (called, for short, the dibao)—originally designed to assist all of the urban poor—changed by the mid-2000s, emphasizing employment, not handouts, for the able-bodied impecunious. Also, the center ordered that cities should subsidize just the most ill and needy. We find that only some Chinese cities—the less well-endowed and politically less prominent—responded to this shift by cutting back their percentage of merely unemployed recipients and increasing the percentage of the truly needy among their dibao beneficiaries. We suggest that two factors could account for this disparity: politicians in wealthier cities have greater autonomy; and they are closer to fulfilling a momentous career goal—stepping up to a post in the central government, and are thus more ambitious. It could be that in prosperous cities—where politicians have control over their budgets and where their trajectories have already positioned them near the peak of the mobility channel—leaders choose to keep the unemployed from protesting by continuing their allowances. This suggests that when two central concerns (redirecting the dibao and social stability) collide, officials in richer cities make different choices than do those in poorer cities.

Dorothy Solinger is a professor of political science at University of California, Irvine

The format of the China Initiative research seminar is an hour and a half long discussion of a pre-circulated working paper. There is no presentation but an informal discussion of the paper. Attendees will include graduate students, postdoctoral fellows, and faculty who share an interest in the China Initiatives broad areas of interdisciplinary scholarship (http://watson.brown.edu/china/)