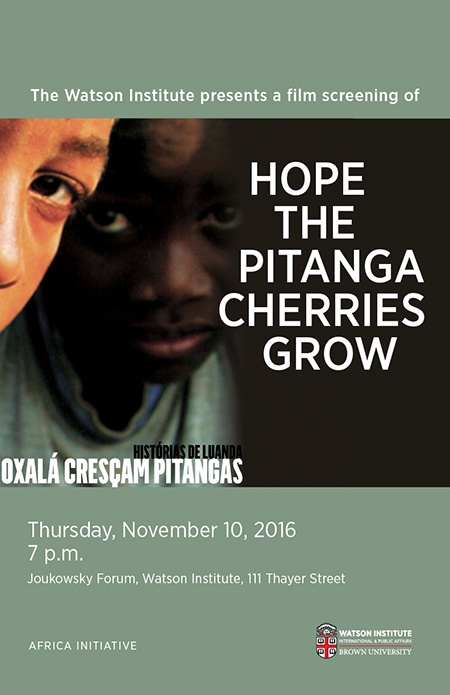 Hope the Pitanga Cherries Grow is an attempt to show what really lies beneath the superficial, permanent fantasy that engulfs Luanda. Along the film, rhythmical, dignified and coherent testimony is voiced by these ten main characters who reveal a universe inhabited by various generations and is a web of complex social dynamics. Luanda has never before been filmed from such a human and realistic perspective: the conflict between the general population and the political sphere; the proliferation of the informal sector; the disillusions and aspirations; discussions about urban space and what the future holds for an Angola experiencing exponential growth.

The ten characters talk about their lives, about how each deals with their own particular reality, about the music that can never stop. A Luanda emerges where imagination and happiness are crucial survival tactics. Where the language changes and adapts to the creative needs of so many people speaking so many different tongues. This is a film about a Luanda that is constantly reinventing itself: its days and its nights, to the rhythm and pace of a city that doesn’t know the meaning of sleep.

Luanda is a mélange of urban and rural phenomena. The informal sector, the great alternative,is the country’s dynamo. The young, daily apply their fertile imaginations to the question of survival and search for happiness. They come up with new ways to live and get by – mainly out of necessity, but also for the sheer joy of feeling alive. In Luanda, a theatre of art, festivity and joy, sadness and happiness live side by side with euphoria. Weddings are always festive; funerals are not necessarily sad occasions. There’s a solid undercurrent of happiness in the actions and intentions of the Luandan people. The dialect spoken reflects the local, more typical way of thinking. It is Portuguese laden with slang and heavily adapted; a perfect example of how the people interact with and intervene in their reality. In their gestures and speech, the fiction that accompanies the rhythm of daily life is apparent. The city is filled, day and night with music; music in the home, music in cars and on the streets. Rhythm is a constant in everyday life because music and conviviality are so important.

Hope the Pitanga Cherries grow, shines a spotlight on hope in the future; it takes us on a journey into people’s lives, and through the streets and stories of Luanda.