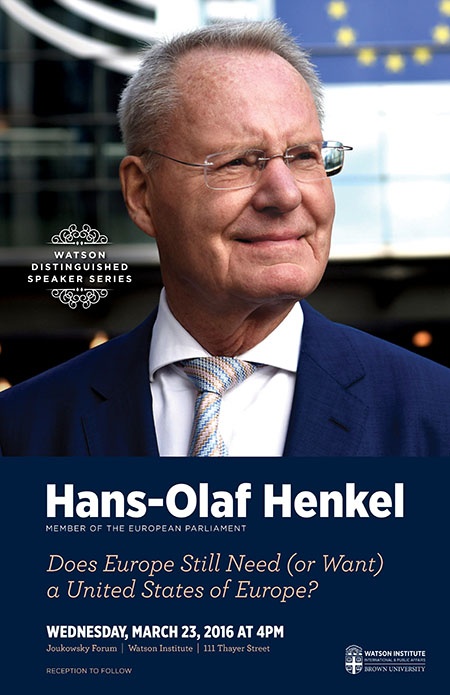 Ever since the original treaty of Rome, the EU has been enlarged and deepened step-by step. While the Common Market has contributed significantly to the prosperity of the E.U.; the introduction of the Euro as the common currency has derailed the EU both economically and politically. The Euro was introduced for political reasons such as maintaining peace and as a tool to get to the "United States of Europe". It results however in centralization, harmonization and the socialization of country and banking debts, hence seriously damaging the E.U.'s long term competitiveness. Instead of contributing to peace it has caused significant political friction. Hans-Olaf Henkel pleads for abandoning the policy of advancing the E.U towards a Political Union and for returning to a E.U. with a Common Market to be completed on the basis of a Europe of Sovereign Nations. Henkel describes why only such policy can keep Britain within the EU. He advocates the closing of ranks with the U.S. on the basis of the Transatlantic Trade and Investment Partnership (TTIP).

Hans-Olaf Henkel was born in on March 14, 1940. Upon completion of his studies at the University for Economics and Politics in , he joined IBM Germany in 1962. After holding various executive positions in Germany, the U.S., Asia and France, he became President of IBM Germany in 1987, Vice-President of the Corporation in 1989 and Chief Executive Officer of IBM Europe, Middle East and Africa in 1993. From 1995 through 2000 he was President of the Federation of German Industries (BDI). Between 2001 and 2005 Mr. Henkel was President of the Leibniz-Association which comprises of 89 state-funded research institutions. From 2009 through 2012 he lectured as Honorary Professor of Economics at the University of Mannheim.

He was member of various company boards such as Bayer/Leverkusen, Continental/Hannover, Orange/Paris, Brambles/Sydney, Daimler Aerospace/Munich, SMS/Duesseldorf. With the Ex-President of the Federal Republic, Roman Herzog, he founded the “Konvent fuer Deutschland”, a think tank aiming at improving Germany’s political decision making system. He is an active member of Amnesty International.