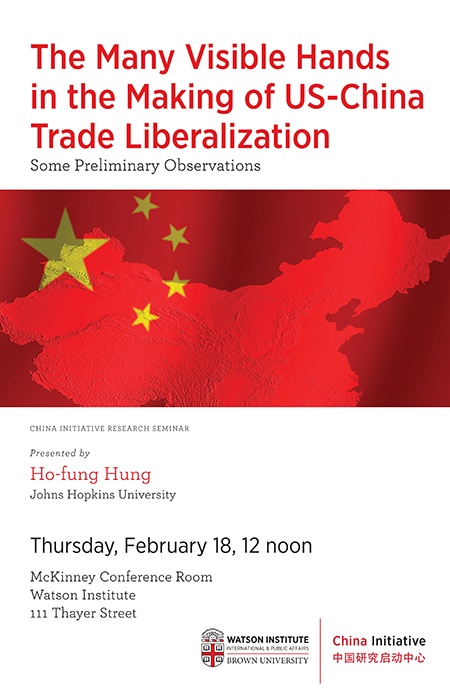 Professor Hung's new project tries to discern the interacting political and social forces that shaped the course and form of global market integration with reference to the trajectory of trade liberalization between the U.S. and China in the 1990s. In 1994, the Clinton administration turned the annual renewal of China’s Most Favored Nation (MFN) status to automatic. In 2001, the George W. Bush administration granted China a permanent MFN status, paving the way for China’s accession to the WTO. Initially, U.S. business communities and policy makers envisioned the upcoming U.S.-China division of labor to be one between high value-added manufacturing export from the U. S. and low value added manufactures from China. But as it turned out in the course of the 1990s and 2000s, the actual division of labor became one based on outsourcing of U.S. manufacturing, high value-added and low value-added sectors alike, to China, fomenting deteriorating trade deficit and financialization of the U.S.. Documenting the debates and political processes that shaped the course of U.S.-China trade liberalization since 1994, this project exposits how U.S. corporations, interests groups, the Chinese state and Chinese enterprises interacted dynamically to foment the particular structure of U.S.-China division of labor that was not anticipated by most actors involved at the outset. It shows how the development of the structure of the global free market is not a unilinear and teleological process, but is shaped by many contingent and interacting social and political forces.

Ho-Fung Hung is an associate professor at Johns Hopkins University

The format of the China Initiative research seminar is an hour and a half long discussion of a pre-circulated working paper. There is no presentation but an informal discussion of the paper. Attendees will include graduate students, postdoctoral fellows, and faculty who share an interest in the China Initiatives broad areas of interdisciplinary scholarship (http://watson.brown.edu/china/)