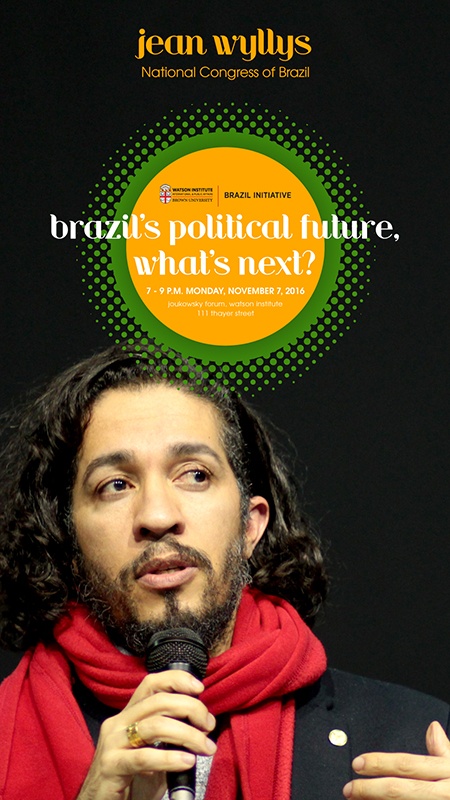 Jean Wyllys is an Afro-Brazilian, openly gay Federal Congressman from Rio de Janeiro, representing the Party of Socialism and Freedom.  Born in Alagoinhas, Bahia, and one of seven children, his mother was a washerwoman and his father was a car painter, who suffered from alcoholism.

Wyllys completed a degree in journalism at the Federal University of Bahia. He originally became famous as the first openly gay participant of the reality show Brazilian Big Brother, where he was the fifth season’s finalist.

In 2010, he was elected to Congress. Wyllys was reelected in 2014 with 145,000 votes, the seventh highest result among 46 Congressional representatives elected from the State of Rio de Janeiro.

Wyllys has a history of involvement in movements for social justice in Brazil, first as a youth activist in the progressive wing of the Brazilian Catholic Church and later as a partner of the LBGT, Black and Women’s movements in Brazil.

As a Federal Congressman, he is one of the most visible national figures in the fight against homophobia, intolerance and religious fundamentalism, the discrimination against Afro-Brazilian religions, slave labor, the sexual exploitation of children and adolescents, and violence against women.

In 2015, The Economist chose him as one of 50 World Diversity Figures. Wyllys is the author of four books, and a Adjunct Professor at UNIRIO, Escola Superior de Propaganda e Marketing (ESPM) and the Universidade Veiga de Almeida (UVA).

He will be in the United States in early November 2016 on a tour, sponsored by the Brazil Initiative at Brown University.