Lisbeth Gronlund – How Not to Start a Nuclear War: US Policy and the Risks of Accidental Nuclear Use 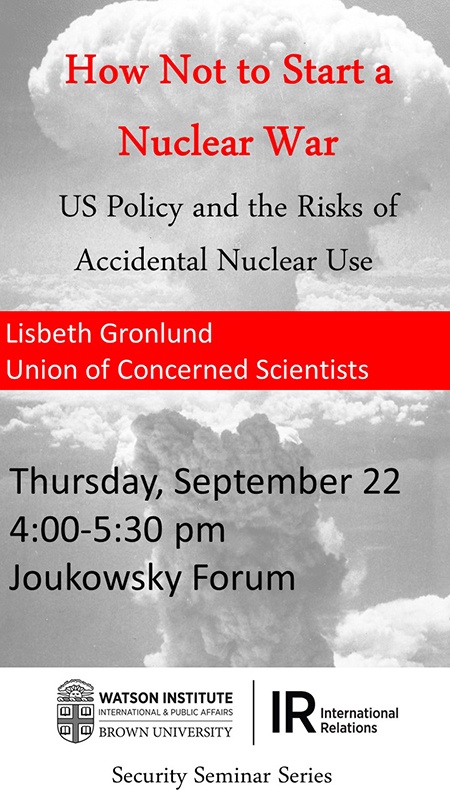 Dr. Lisbeth Gronlund is co-director of the Global Security Program at the Union of Concerned Scientsts.  She focuses on technical and policy issues related to nuclear weapons, ballistic missile defenses, and space weapons. She has authored numerous articles and reports, lectured on nuclear arms control and missile defense policy issues before lay and expert audiences, and testified before Congress. A long list of news organizations, including the New York Times and NPR, have cited Gronlund since she joined UCS in 1992.

She is the co-recipient of the 2001 Joseph A. Burton Forum Award of the American Physical Society (APS) “for creative and sustained leadership in building an international arms-control-physics community and for her excellence in arms control physics.” Before joining the Union of Concerned Scientists, Dr. Gronlund was an SSRC-MacArthur Foundation fellow in international peace and security at the University of Maryland and a postdoctoral fellow at the Massachusetts Institute of Technology Defense and Arms Control Studies Program. She has a doctorate degree in theoretical physics from Cornell University.

Gronlund will provide an overview of the evolution of nuclear arsenals and policies since the end of the Cold War, including a summary of the current international situation. She will then focus on current debates about nuclear weapons policy in the United States, looking in some detail at the issue of accidental nuclear war.

Sponsored by the International Relations Program and the Security Seminar Series.