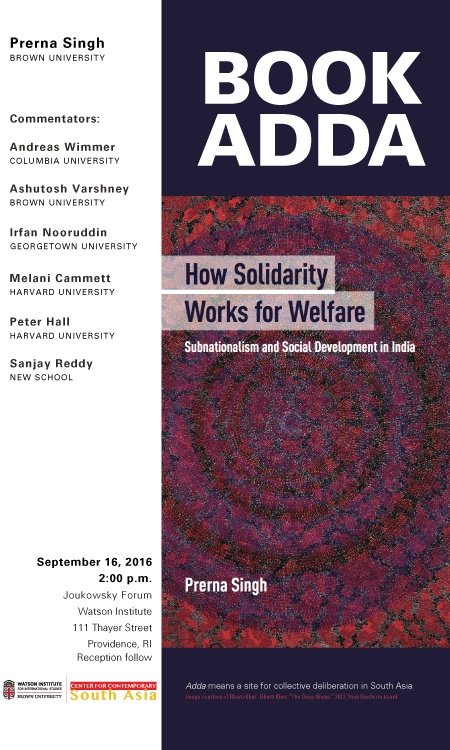 Adda is word used in South Asia to indicate a site of collective deliberation.  In this adda, five experts will comment on Prerna Singh's How Solidarity Works for Welfare: Subnationalism and Social Development in India.  The author will then have time to respond before the floor is opened for questions from the audience.

How Solidarity Works for Welfare poses the following questions:
Why are some places in the world characterized by better social service provision and welfare outcomes than others? In a world in which millions of people, particularly in developing countries, continue to lead lives plagued by illiteracy and ill-health, understanding the conditions that promote social welfare is of critical importance to political scientists and policy makers alike. Drawing on a multi-method study, from the late nineteenth century to the present of the stark variations in educational and health outcomes within a large, federal, multiethnic developing country - India, this book develops an argument for the power of collective identity as an impetus for state prioritization of social welfare. Such an argument not only marks an important break from the dominant negative perceptions of identity politics but also presents a novel theoretical framework to understand welfare provision.