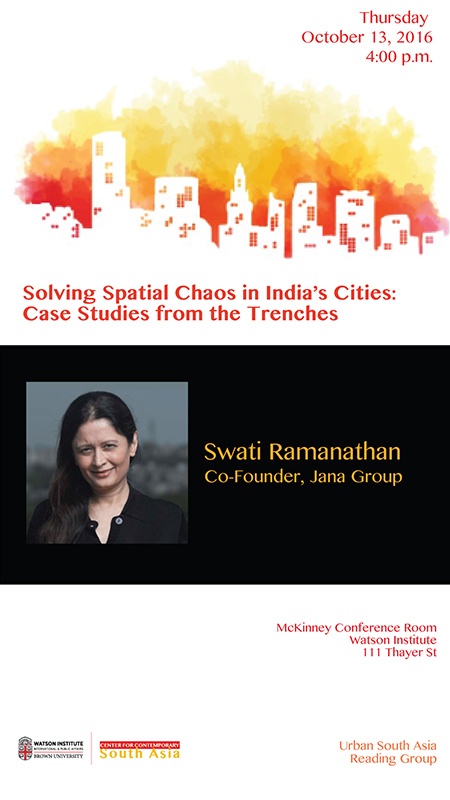 Swati Ramanathan is co-founder of Jana Group, a clutch of social enterprises aimed at urban transformation in India. Ms Ramanathan leads Janaagraha’s innovations in the use of social media and mobile and internet technology for civic participation, ipaidabribe.org on retail corruption, and ichangemycity.org on hyper local citizen participation. In 2013, Ms. Ramanathan was honoured by the National Democratic Institute in Washington DC, with the Democracy and Civic Innovator Award.

In 2008, Ms. Ramanathan was honored by the Government of Rajasthan with the Rajyotsava Puraskar for her work on the Jaipur 2025 Master plan. She is currently member of the Chief Minister’s Advisory Council, Government of Rajasthan. She is undertaking the development of a Spatial Development Plan 2035 for Sawai Madhopur, and transformational projects for the city that are related to Mobility and Conservation of the city’s water system and Protection of the Forest and Tiger Sanctuary.

Ms. Ramanathan’s work on Urban Design standards for city roads have been adopted as the desired standards by the state of Karnataka (Tender SURE – Specifications for Urban Road Execution), with the Government of Karnataka allocating Rs.500 crores in the state budget, towards model Tender SURE roads for the CBD area of Bangalore city. The Chief Minister has announced 50 more roads will be included in the 2016-17 budget.

In 2007, Ms. Ramanathan was named a Young Asian Leader by the Asia Society. In 2013, she and her husband were honored with as the Social Entrepreneurs of the Year Award by Forbes India.

Ms. Ramanathan holds a BS from India, and an MS from Pratt Institute, N.Y.