The Transition of Power ─ From Obama to Trump 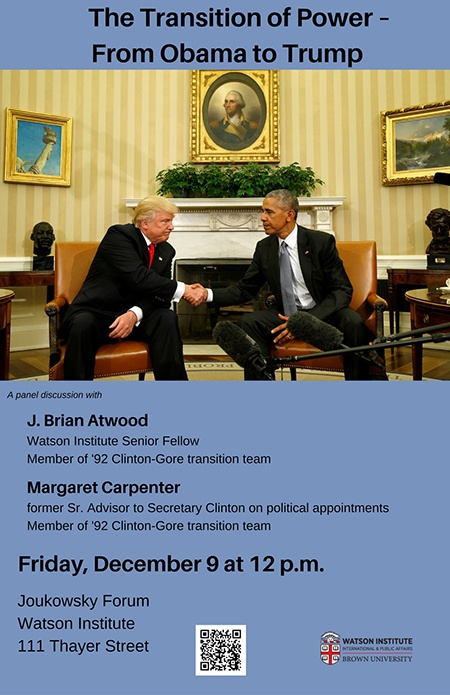 A forum for students and faculty to discuss all aspects of the White House transition. What's at risk? What questions should we be asking? Does this transition differ from those in recent history? Brian Atwood and Margaret Carpenter, political strategists who served on previous White House and State Department transition teams, will lead the conversation.

J. Brian Atwood is a senior fellow at the Watson Institute, professor emeritus at the University of Minnesota’s Hubert H. Humphrey School of Public Affairs, and a non-resident fellow at the Brookings Institution. Atwood led the US Agency for International Development (USAID) during the administration of President William Clinton, serving as its administrator for six-and-a-half years. He earlier led the Clinton-Gore transition team at the State Department in 1992, and was under secretary of state for management prior to his appointment as head of USAID. During the Carter administration, Atwood was assistant secretary of state for Congressional relations. In 2001, Atwood served on UN Secretary General Kofi Annan’s Panel on Peace Operations. He was legislative adviser for foreign and defense policy to Senator Thomas F. Eagleton (D–Mo) (1972 to 1977).

Margaret Carpenter has worked on US foreign policy and foreign aid in the US Senate, several Executive Branch agencies and departments, think tanks, and nonprofit organizations in the US and in Asia.

Her familiarity with Presidential transitions and personnel issues included serving as a political appointee in the State Department and US Agency for International Development (USAID) in the Carter, Clinton, and Obama administrations. In 1992-3, she worked on the Clinton-Gore Transition Team, helping to identify and vet potential candidates for Presidential appointments in State, USAID, and Peace Corps. After a similar stint in the White House Office of Presidential Personnel in 1993, she was nominated and confirmed by the Senate to be Assistant Administrator of USAID for Asia, a role that USAID Administrator Brian Atwood eventually expanded to include US foreign assistance in the Middle East and North Africa as well.

At the request of Secretary of State Hillary Clinton, she returned to State in 2009 as a Senior Advisor on Presidential appointments in State and USAID during the first year of the Obama Administration.

Ms. Carpenter has a BA and MA in political science from the University of California, Berkeley, and a Certificate of Political Studies from the Institut d’Etudes Politiques in Paris. She has served on a variety of nonprofit boards, including Amnesty International USA, Global Rights: Partners for Justice, and currently the East-West Center in Honolulu.