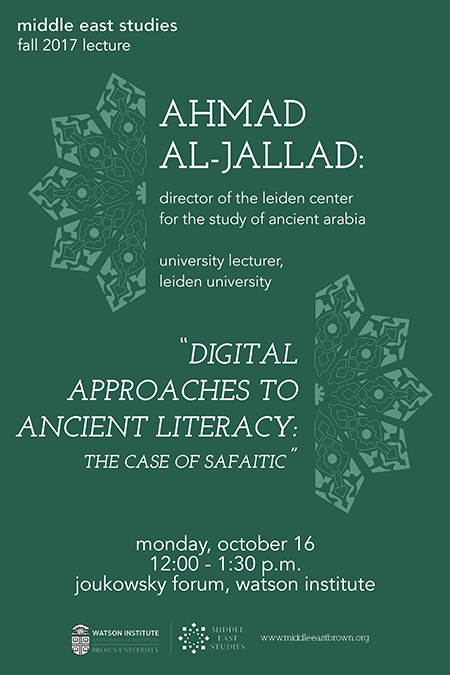 MES will hold space and lunches until 12 p.m. after which seminar seating and lunches will be opened up to those on standby.

Presented by Ahmad Al-Jallad, Director of the Leiden Center for the Study of Ancient Arabia, University Lecturer, Leiden University

To date, over 50,000 inscriptions in an Ancient North Arabian alphabet called Safaitic have been discovered, and many more await study in the Syro-Jordanian Black Desert. The large quantity of these texts along with their seemingly mundane contents have suggested to researchers that literacy was widespread among the Arabian nomads of classical antiquity. In 2017, the OCIANA project (Oxford) completed the digitization of some 36000 Safaitic inscriptions, providing the first opportunity to study the massive corpus using the toolbox of digital humanities. This talk will investigate claims regarding mass literacy by looking at how many unique individuals there are in the corpus, how many individuals produced more than one text, and the relationship between content and authorship. We conclude that the corpus provides far less evidence for mass literacy than previously assumed. Furthermore, the answers to the aforementioned questions further underscore how the purpose and function of the Safaitic inscriptions remains a mystery.