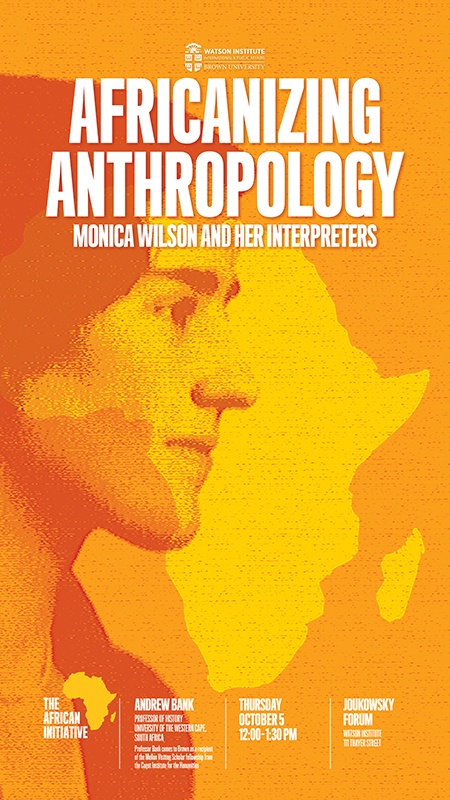 Based on Bank’s co-edited collection Africanizing Anthropology: Monica Wilson and her Interpreters (CUP 2013), the lecture explores contribution of one South African woman anthropologist, Monica Hunter Wilson (1908-1982) and her creative collaborations with African co-researchers. It tracks these relations through her successive field sites in Pondoland and East London in the early 1930s, Bunyakyusa (in Tanzania) in the mid-late 1930s and Langa in the early 1960s. It reveals the indispensable hidden contributions to South and Central African anthropology of a diverse cast of African ‘cultural brokers’ who acted variously as her language teachers, guides, networkers, co-interviewees or bodyguards.

Andrew Bank specializes in colonial cultures, particularly those of the social sciences. His major intellectual project is to recover the involvement of European and white South African women and Africans in the creation of hybrid knowledge about colonial societies, a collaboration erased by colonial social science. He is a former editor of Kronos, a leading journal of southern African history, and recipient of several book awards and research fellowships. He also has served as chair of the History Department at UWC, one of South Africa's Historically Black Institutions that has become a leading intellectual center since 1994.

The History Department and the Africa Initiative of the Watson Institute announce this lecture by Andrew Bank, Professor of History at the University of the Western Cape, South Africa. Professor Bank comes to Brown as a recipient of the Mellon Visiting Scholar fellowship from the Cogut Institute for the Humanities.