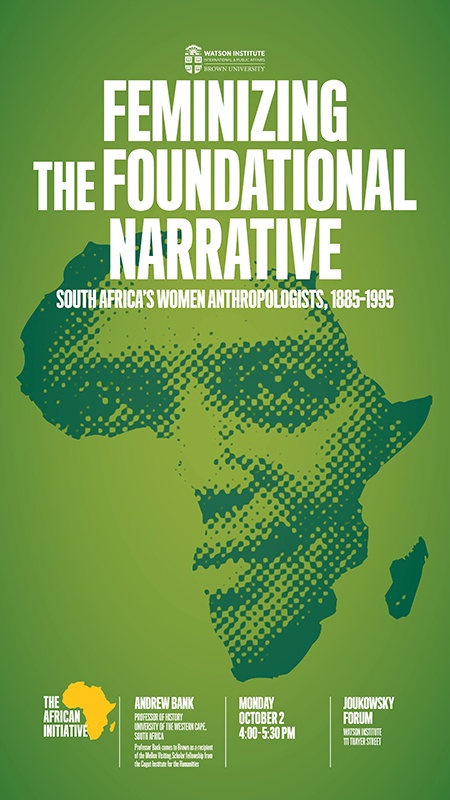 Based on the Bank’s recently published monograph Pioneers of the Field (CUP 2016), this seminar challenges the conventional male-dominated and British-centred story of the early history of anthropology in South Africa. It provides an alternative reading of the foundations of the discipline through a collective biography of six internationally acknowledged foremothers of social anthropology. The approach also challenges Marxist and post-colonial critics of South African social anthropology who have portrayed the work of these scholars as politically conservative and reifying concepts of tribe. Instead it makes a case that the ethnographies and public intellectual practices, inter alia as teachers and welfare workers, of Winifred Tucker Hoernle, Audrey Isabel Richards, Monica Hunter Wilson, Ellen Hellmann, Hilda Beemer Kuper and Eileen Jensen Krige were profoundly humanist contributions driven by the desire to foster respect for much-denigrated African cultures and to challenge the intellectual basis of the segregationist and apartheid governments in 20th century South Africa.

Andrew Bank specializes in colonial cultures, particularly those of the social sciences. His major intellectual project is to recover the involvement of European and white South African women and Africans in the creation of hybrid knowledge about colonial societies, a collaboration erased by colonial social science. He is a former editor of Kronos, a leading journal of southern African history, and recipient of several book awards and research fellowships. He also has served as chair of the History Department at UWC, one of South Africa's Historically Black Institutions that has become a leading intellectual center since 1994.

This event was co-organized by the History Department

​The History Department and the Africa Initiative of the Watson Institute announce this lecture by Andrew Bank, Professor of History at the University of the Western Cape, South Africa. Professor Bank comes to Brown as a recipient of the Mellon Visiting Scholar fellowship from the Cogut Institute for the Humanities.