Anupama Bhagwat: An Evening of Music and Conversation 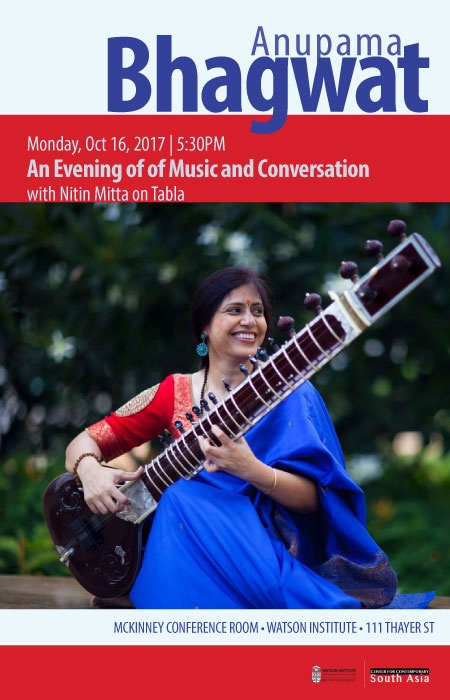 Anupama Bhagwat, a leading Hindustani sitarist of the Imdadkhani Gharana, will be visiting Brown for an evening of music and conversation about her life, work, and background and the experience of performing and teaching in both India and the United States.

Anupama Bhagwat, sitar musician nonpareil, has carved a niche in Indian Classical Music with a versatile & eclectic style. Acclaimed world-wide with a repertoire of global performances since 1995, her sensitivity and erudition has taken her to the highest echelons of the modern genre. One of the leading disciples of Pandit Shri Bimalendu Mukherjee, doyen of the Imdadkhani Gharana, Anupama's style is characterized by scintillating fast taans, mastery of the meditative alaap, and brilliant fluency of melody (raaga-bhava), while remaining true to tradition.

Anupama has been conferred the title Surmani, by Sur Sringar Sansad, Bombay (1995). Early on, she had won First Position in the All India Radio (AIR) Music Competition (1994), as well as a HRD Scholarship from the Government of India (1993-1996). Anupama obtained her Masters in music from Indira Kala Sangeet Vishwavidyalaya, India; and received grants in ‘00, ‘02, ‘04, and ‘08, from the Ohio Arts Council (USA).