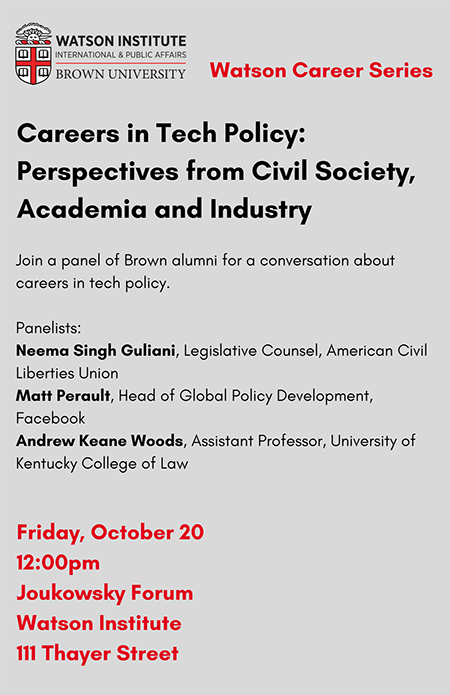 Matt Perault is the head of global policy development at Facebook, where he leads the company’s global public policy planning efforts on issues such as law enforcement and human rights, and oversees public policy for WhatsApp, Oculus, and Facebook Artificial Intelligence Research. Prior to joining Facebook, Matt was Counsel at the Congressional Oversight Panel. He previously worked as a consultant at the World Bank and served as a law clerk for the U.S. District Court for the District of Columbia. Matt holds a law degree from Harvard Law School, a Master's degree in Public Policy from Duke University's Sanford School of Public Policy, and a Bachelor's degree in political science from Brown University.

Neema Singh Guliani is a legislative counsel with the American Civil Liberties Union Washington Legislative Office, focusing on surveillance, privacy, and national security issues. Prior to joining the ACLU, she worked in the Chief of Staff’s Office at DHS, concentrating on national security and civil rights issues. She has also worked as an adjudicator in the Office of the Assistant Secretary for Civil Rights in the Department of Agriculture and was an investigative counsel with House Oversight and Government Reform Committee, where she conducted investigations related to the BP oil spill, contractors in Iraq and Afghanistan, and the Recovery Act. Neema is a graduate of Brown University where she earned a BA in International Relations with a focus on global security and received her JD from Harvard Law School in 2008.

Andrew Keane Woods is an assistant professor of law at the University of Kentucky College of Law. Professor Woods’s teaching and research interests include cybersecurity and the regulation of technology, contract law, international law (both public and private), and empirical legal studies. His scholarship has appeared in the Stanford Law Review, the Harvard International Law Journal, the Virginia Journal of International Law, and the Chicago Journal of International Law. His scholarship has been cited in the Economist, the Wall Street Journal, the Washington Post, Bloomberg, and NPR. Professor Woods is a contributing editor of the Lawfare blog, and has written for the New York Times, the International Herald Tribune, the Financial Times, and Slate.