Civil Society and Human Rights in Peril: Threats and Responses Across the World 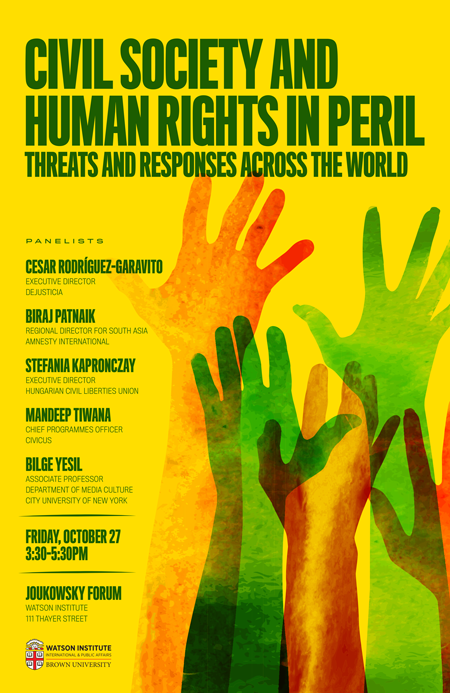 This panel of engaged academic researchers and reflective human rights activists from around the world will explore effective responses to mounting threats against civil society action, particularly human rights organizations.

Biraj Pataik is the Regional Director for South Asia at Amnesty International. Previously, he served as PrincipalAdvisor at the Office of the Supreme Court Commissioners on the right to food in India. Over the past ten years, he has played a leading role in campaigning and advocacy efforts for the landmark National Food Security Act in India. A management graduate from the Institute of Rural Management Anand (IRMA), he is an Honourary Research Fellow at Coventry University, and serves on the international editorial board of the Right to Food and Nutrition Watch. Patnaik served on the Advisory Board of Amnesty International India.

Stefánia Kapronczay is the Executive Director of the Hungarian Civil Liberties Union. The HCLU strives to educate citizens about their basic human rights and freedoms, and takes a stand against undue interference and misuse of power by those in positions of authority. The HCLU monitors legislation, pursues strategic litigation, conducts public education and launches awareness raising media campaigns.

Mandeep Tiwana is Chief Programmes Officer at CIVICUS. He specialises in legislation affecting the core civil society freedoms of expression, association and assembly. On joining CIVICUS in May 2008, he was engaged in advocacy to protect and expand civil society space globally, including through the completion of a comprehensive compendium of legal instruments and other intergovernmental commitments concerning core civil society rights. Previously, he advised the New Delhi Delegation of the International Committee of the Red Cross on due process guarantees for persons detained in Jammu and Kashmir.

Bilge Yesil is an Associate Professor in the Department of Media Culture at College of Staten Island, CUNY. She is primarily interested in the study of communication technologies and their broader political and historical contexts. Her work examines media regulation and censorship, surveillance society, new media, and visual culture. Her first book, Video Surveillance: Power and Privacy in Everyday Life was published in 2009. Completed with a research grant from the National Science Foundation, this book analyzes the socio-political dimensions of the proliferation of video surveillance, and the debates surrounding technology, control, and privacy.