Constellations of Empire, Nationalism and Revolution in 1917 and 2017 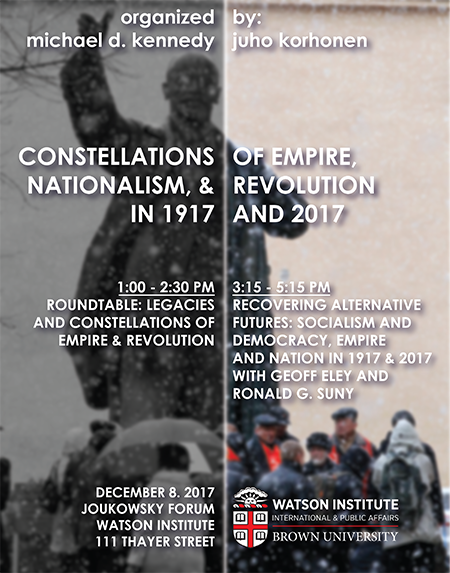 Roundtable: Legacies and Constellations of Empire and Revolution

An event organized by Michael D. Kennedy and Juho Korhonen

In 1917, the fates of empires, the courses of nationalism, and the prospects of revolution defined political alternatives; by the end of that year, revolutionary socialism animated Russian state power. Its succeeding Soviet Union and subsequent state transformations made with its example in mind shaped the short 20th century.

In 2017, the fates of empires, the courses of nationalism, and radical transformations of a different sort define political alternatives. While political and economic structures shape the terms of our alternative futures, the possibilities embryonic in this world historical conjuncture are various. Historical depth and political imagination might not only inform how we understand the 21st century ahead, but plausibly shape it.

Two scholars with that depth and imagination lead our discussion of rethinking 1917 in 2017, and its implications for the century before us, Geoff Eley and Ronald Grigor Suny.

Syeda Masood: The Case for a DuBoisian Ethic in Postcolonial Theory using the Histories of The Bookseller of Kabul/Once Upon a Time There was a Bookseller in Kabul

In Postcolonial theory, one productive area of debate has focused on representation of the colonized subject. It focuses on whether the colonized can be represented or not and suggests that reflexivity on one’s own positionality and biases as well as and openness to the other’s norms, values and habitus is necessary to ensure that knowledge does not get degraded by the colonial project. While acknowledging the importance of this line of thinking, in this article, I engage and extend this debate by analyzing the controversy caused by the novel The Bookseller of Kabul by a Norwegian journalist on an Afghan family as well as the response by the subject of the first book, written in his book Once Upon a Time There was a Bookseller in Kabul. I focus on the scholarly views on it and using them claim that the Saidian ethic has an ontological myopia (Rodriguez-Muniz 2015). It is core centric in its passion to correct the researcher thereby making the subject of research actually the researcher themselves. I claim, therefore, that the DuBoisian phenomenological and marginalized-centric thought can greatly benefit postcolonial theory of knowledge production and can be a step in the decolonization of the academy.

In the summer of 1944, the Red Army reached the Latvian-Russian border, signaling the immanent renewal of Soviet occupation of Latvia and the impending collapse of German military occupation. In spite of this, many soldiers serving in the 130th Latvian Rifle Corps of the Red Army perceived their entry into Latvian territory as the first step toward the liberation of their homeland. Using first-person primary sources, including interviews from the Commission for the History of the Great Patriotic War (Mints Commission) and published memoirs, this paper critically examines the attitudes and opinions of Latvian Red Army soldiers regarding the capture of Šķaune parish in July 1944. These sources indicate that their encounter with this border municipality and its local inhabitants generally served to solidify feelings of attachment to Latvia, loyalty to the Soviet Union, and antagonism toward Germany. This episode illustrates how members of a national group can align in wartime with a foreign power that seeks to control their territory. More specifically, it demonstrates the ways in which Soviet propaganda and nationalities policy were successful during the war in motivating non-Russian soldiers like Latvians to fight.

What is the relationship between difference and the civil sphere? This article examines conventional sociological theories on modes of incorporation – assimilation, hyphenation and multiculturalism – and argues that they rest on a separation of society and history and a temporal break between the imperial past and the nation’s present. Drawing on revisionist histories of French Algeria, it shows how colonial France created a distinction between citizenship and colonial subjecthood: In the colonial context, the “incapability” of French Algerian Muslims to participate in public life was so intricately tied to their private identities that it became impossible to shed these stigmatized qualities to enter public life. Civil codes were used to restrict access to the French civil sphere in the colonial context based on a particular cultural construction of civility that derived from social evolutionary thought. Moreover, the utopia underlying assimilation was the idea that colonial subjects should not only become Europeans but should in fact become perfected Europeans, creating an unachievable ideal that ended up reinforcing the meaning of “Frenchness.” This article suggests that meaning structures of the co-constitutive making of “us” and “them” as part of the imperial project carried over into national politics. Thus, as opposed to locating the failure of assimilation and the shortcoming of universal solidarity in a failure of politics, it is our theoretical vocabulary which rests on a colonial blindspot and an economics of forgetting of our colonial past. This means that for contemporary immigrant movements to assert their position within the civil sphere, belonging should not be based on the logic of incorporation but a rethinking of the nation’s founding histories, logics and traumas.

Juho Korhonen, Empire and National Self-Determination Before and After 1917

The events of 1917, and 1905 – 1923 more broadly, have recently been reinterpreted as global revolutions or imperial revolutions counter to previous narratives of imperial dissolution and national revolutions. As Ron Suny has pointed out, the national gained its significance only in the aftermath of the revolutions, while Geoff Eley et al. have shown that the pre-revolution era was one of optimistic and anxious rivalry of shaping the future; “…battle in the present to take hold of, even master, the time that awaited them”. Reform, empire and democratization are key words in describing the pre-revolutionary era, all of which were thereafter subdued and confined under the aegis of national self-determination. I will first briefly discuss this pre-1917 unfolding of possibilities. Then, with the example of the Grand Duchy of Finland under the Russian Empire and its independence process, I investigate the changes that turned imperial politics into national politics. I aim to show how this formed a new ‘scaffolding’ for democracy, the state and socialism, that suppressed and contained previous ‘rivalries of shaping the future’. I thereby join arguments emphasizing that the post-revolutionary world should be seen in relation to the imperial politics from which it arose, and that we need to be specifically careful not to interpret the pre-revolutionary world from our post-1917 standpoint. This will hopefully help us have a more critical perspective on our present rivalries for the future.

Michael D. Kennedy is Professor of Sociology and International and Public Affairs at Brown University. Throughout his career, Kennedy has addressed East European social movements, national identifications, and systemic change.  For the last 15 years, he also has worked in the sociology of public knowledge, global transformations, and cultural politics, focusing most recently on social movements, universities, and solidarity within and across nations. His most recent book is Globalizing Knowledge: Intellectuals, Universities and Publics in Transformation (2015).

Holly Case is a historian of modern Europe whose work focuses on the relationship between foreign policy, social policy, science, and literature in the European state system of the nineteenth and twentieth centuries. Her first book, Between States: The Transylvanian Question and the European Idea during WWII, was published in May 2009. She is currently at work on a history of the “Age of Questions” (the Eastern, Jewish, Polish, woman, and worker questions, etc.) spanning the nineteenth and twentieth centuries.

Maud S. Mandel is Dean of the College and Professor of History and Judaic Studies at Brown University. Her monograph, In the Aftermath of Genocide: Armenians and Jews in Twentieth Century France, was published by Duke University Press in 2003. Her book, Muslims and Jews in France: History of a Conflict, appeared with Princeton University Press in January 2014. She has been awarded fellowships from the American Council of Learned Societies and the American Philosophical Society.

Zachary Wilmot is a PhD candidate in sociology, whose research focuses on the impacts of social movements and revolutions on culture, politics, and social change. His dissertation examines the dynamic and complex ways in which revolutions encourage social transformation, with a focus on the development and durability of revolutionary cultures following the 1979 Iranian and Nicaraguan revolutions.

Ricarda Hammer is a PhD candidate in sociology. She is interested in social and postcolonial theory and the legacies of colonialism in European politics. In her dissertation, she analyses the parallel dynamics of democratization and colonial repression in the British Empire.

Syeda Masood is a PhD student in sociology, whose research focuses on the relations between cultural consumption and “orientalist” texts. Her dissertation examines how the U.S. empire manifests in the creation & reception of cultural objects and relies on analyzing the creation and readings of two books with interrelated histories written after 9/11 in places they are connected to - Afghanistan, Norway and the U.S.

Harry C. Merritt is a PhD candidate in history, focusing on 20th century Central and Eastern Europe. His research interests include nationalism, collective identity, interethnic relations, and the impact of war on society, with a current research focus on the Latvian experience of World War II.

Juho Korhonen is a PhD candidate in sociology. His work focuses on historical transformations of political entities from empire to nation-state, socialism to post-socialism, and welfare to post-welfare states. In his dissertation Juho explores the imperial revolutions in Germany and Russia and the rise of national self-determination in their wake.

Geoff Eley is Karl Pohrt Distinguished University Professor of Contemporary History at the University of Michigan, where he has taught since 1979. His works include Reshaping the German Right: Radical Nationalism and Political Change after Bismarck (1980, 1991); (with David Blackbourn) The Peculiarities of German History (1980, 1984); and (with Ronald Suny) Becoming National: A Reader (1996). More recently he published Forging Democracy: a History of the Left in Europe, 1850-2000 (2002); A Crooked Line: From Cultural History to the History of Society (2005); (with Keith Nield) The Future of Class in History (2007); and Nazism as Fascism: Violence, Ideology, and the Ground of Consent in Germany, 1930-1945 (2013). He is coeditor of German Colonialism in a Global Age (2014), and German Modernities form Wilhelm to Weimar: a Contest of Futures (2016). He is writing a general history of Europe in the twentieth century and a new study of the German Right, Genealogies of Nazism: Conservatives, Radical Nationalists, Fascists in Germany, 1860-1945.

Ronald Grigor Suny is William H. Sewell Jr. Distinguished University Professor of History at the University of Michigan; Emeritus Professor of Political Science and History at the University of Chicago; and Senior Researcher at the National Research University – Higher School of Economics, St. Petersburg, Russia. He is the author or editor of twenty books, including The Making of the Georgian Nation (1988,1994); (with Geoff Eley) Becoming National: A Reader (1996); (with Michael D. Kennedy) Intellectuals and the Articulation of the Nation (1999). More recently he published The Structure of Soviet History: Essays and Documents (2003, 2013); The Soviet Experiment: Russia, the USSR, and the Successor States (1998, 2010); They Can Live in the Desert But Nowhere Else: A History of the Armenian Genocide (2015); (with Valerie A. Kivelson) Russia’s Empires (2017) and most recently Red Flag Unfurled: History, Historians and the Russian Revolution (2017).