A Conversation with Governor Gina Raimondo 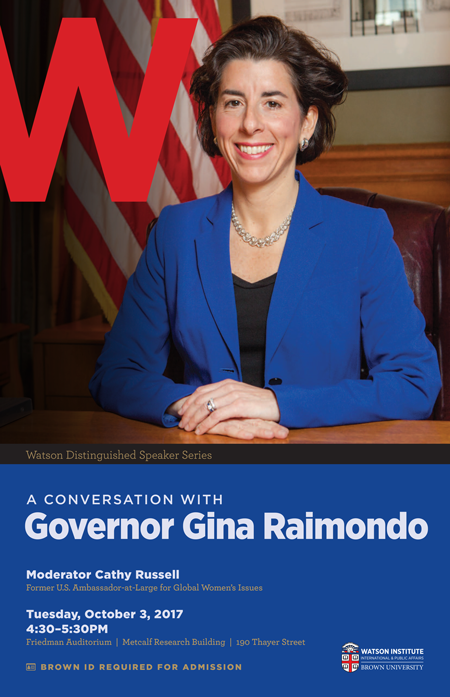 Join Ambassador Cathy Russell and Rhode Island Governor Gina Raimondo for a discussion on politics, policy, and leadership. Governor Raimondo, one of only six female governors currently in office, will share her journey into politics and how she has affected change in these challenging political times.

Cathy Russell was described by President Obama as “a longtime advocate for women, for justice, for fairness.” During the Obama Administration, Cathy shaped U.S. foreign policy on gender equality. In the first term, she guided the creation of the first-ever U.S. global strategy on gender based violence at the White House, where she served as Deputy Assistant to the President and Chief of Staff to Second Lady Dr. Jill Biden. In the second term, she led the U.S. Department of State in integrating women’s issues into U.S. foreign policy as the U.S. Ambassador-at-Large for Global Women’s Issues.

During her time as Ambassador, Cathy was responsible for U.S. efforts to advance gender equality and the status of women and girls around the world, developing a toolbox of policies, programs, partnerships, and diplomatic efforts. She traveled to nearly 50 countries, developed groundbreaking U.S. government policies and tested new approaches, coordinated interagency efforts, and built partnerships with Fortune 50 and Fortune 500 companies. She also worked with foreign governments, multilateral organizations, and civil society on a full range of issues, from women’s economic empowerment to adolescent girls’ education to women’s roles in peace and security.

Cathy previously served as the senior advisor on international women’s issues on the Senate Foreign Relations Committee, where she the drafted the International Violence Against Women Act, the first piece of U.S. legislation that proposed streamlining and expanding U.S. efforts on gender-based violence.

During the Clinton Administration, Cathy was a trusted adviser to both the Attorney General and the Deputy Attorney General on a range of policy and legislative matters in her role as Associate Deputy Attorney General. Previously, she served as the Staff Director of the Senate Judiciary Committee during the development of the landmark Violence Against Women Act and the confirmations of Supreme Court Justices Stephen Breyer and Ruth Bader Ginsburg. She also worked as Senior Counsel to Senator PatrickJ. Leahy, whom she advised on constitutional issues including privacy and First Amendment matters, the Electronic Communications Privacy Act, and the Freedom of Information Act.