Cotton — A Screening and Discussion with Film Maker Zhou Hao 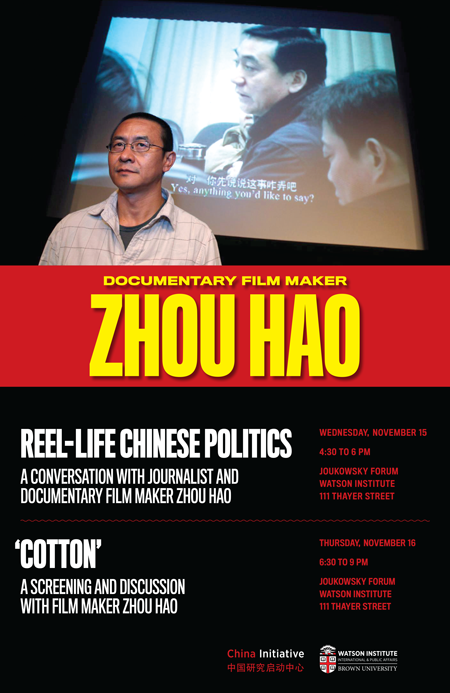 Film in Chinese with English subtitles.

Join documentary film maker Zhou Hao for a screening of his film Cotton (2015, 93 mins), followed by a Q&A with the director.

For over a decade, Zhou has been making independent documentaries probing many of China’s most urgent social issues, including migrant labour, drug abuse, law enforcement and political corruption, and Cotton continues this by exploring the lives and experiences of the unseen work force behind China’s cotton trade.

The character driven documentary follows four principal characters, including a farmer, a cotton picker and workers in cotton factories, and takes the viewer on an odyssey into the heart of an incredibly labour-intensive industry, from planting and growing cotton in the North-Western province of Xinjiang through to fashion events in Southern Guangdong. Through their experiences Zhou examines the ‘social contract’ offered by the Chinese leaders to the citizens of the country, supposedly aimed at bringing about a new and harmonious society, but which is instead recreating the old class systems previously destroyed by the communist ideals and revolution of Mao. With ruthless commercial competition and a win at all costs attitude driving the industry, the incredibly humanistic film depicts its protagonists being subjected to harsh conditions as they try desperately to climb the social ladder of modern China, though at the same time maintaining extraordinary courage and dignity.