Country at a Crossroads: A Roundtable on Brazilian Politics 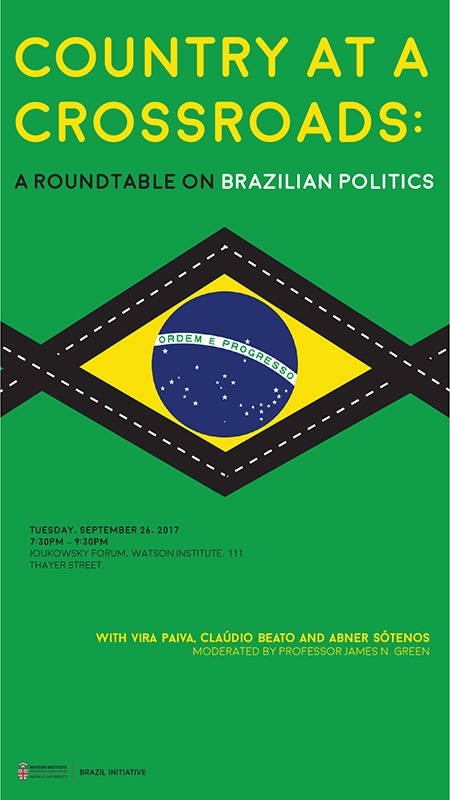 Three Brazilian scholars will comment on the current political situation in Brazil and offer their perspectives for the country's future. Professor Jim Green will moderate.

Vera Paiva is Craig M. Cogut Visiting Professor at CLACS, and is a Professor in Social Psychology at the University of São Paulo where she coordinates the Interdisciplinary Group for Aids Prevention. She was a member of the National Council for Human Rights at the Secretariat of Human Rights of Brazil, representing civil society (2014-2016).

Dr. Cláudio Beato is a Full professor in the Departments of Sociology and Anthropology. He is currently is the coordinator of CRISP (Center for Studies in Criminality and Public Security) at the Federal University of Minas Gerais (UFMG). He has developed a number of projects regarding homicide control in areas of risk; integrated management of police processes; the use of intervention technologies, information technologies and community policing.

Abner Sótenos received his Bachelor's and Master's Degrees in history from the Federal University of Rio de Janeiro (UFRJ). In 2013, he was awarded the Ana Lugão Rios’s Prize for the Best Master’s Thesis Honorable Mention by the Graduate Program in Social History at UFRJ. He also worked with the State Commission for Truth of Rio de Janeiro (CEV-RJ) between 2014 and 2015. His research focuses on grassroots movements throughout modern Brazilian history, the role of apparatuses of repression during the Brazilian dictatorship (1964-1985), and changes in political regimes.