Dan Maffei '90 – In the Political Trenches: Serving in Congress During the Obama Years 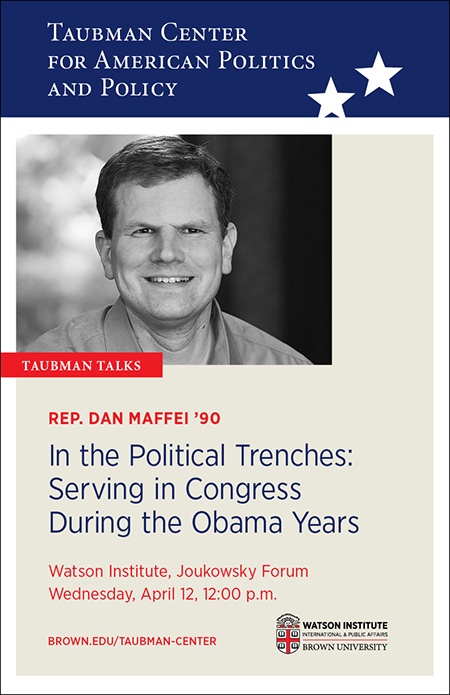 Former Representative Dan Maffei ’90 (D-NY) talks about balancing idealism and pragmatism — as a staffer, candidate, and member of Congress (and graduate of Brown University) — as he relates his experiences in national politics and policy. Maffei, a strong supporter of pay equity for women and strengthening the Violence Against Women Act, was a key swing swing vote in the tumultuous 111th Congress on such issues including the Obamacare and Wall Street reform.

Dan Maffei ’90 currently serves on the Federal Maritime Commission, the independent agency that regulates international ocean transportation. He was elected to two terms in the U.S. Congress representing a historically Republican area of Upstate New York.

Previously, Maffei had worked for ten years as a communications strategist and spokesperson in the House, Senate, and political campaigns. His prior experience includes television reporting and producing.

In addition to his bachelor's degree in history and American civilization from Brown, Maffei has masters degrees from Harvard’s JFK School of Government and the Columbia School of Journalism.