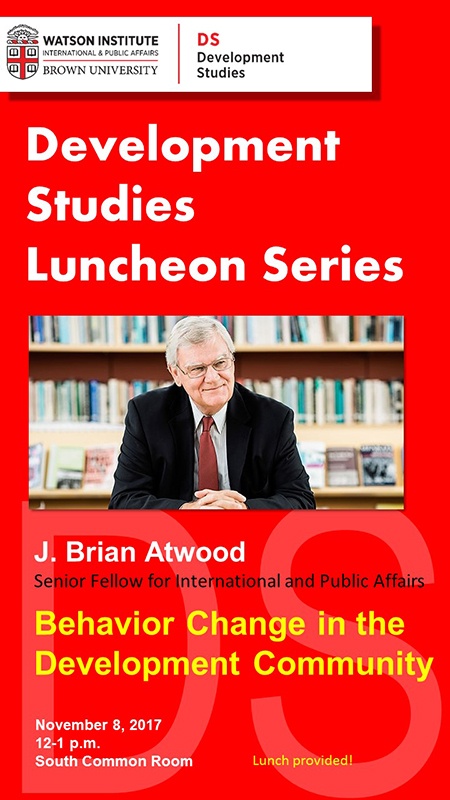 Lunch will be served

Interested in Development Studies? Not sure what we are about? Would you like to get to know professors? Come speak with Watson Institute Senior Fellow J. Brian Atwood about his work on behavior change in the development community.

J. Brian Atwood is a Senior Fellow for International Studies and Public Affairs at Brown University’s Thomas Watson Institute for International Studies, and Professor Emeritus at the University of Minnesota’s Hubert H Humphrey School of Public Affairs. He served as Chair of Global Policy Studies and Professor of Public Policy at the Humphrey School from 2012 to 2015. He was dean of the Humphrey School from 2002 to 2010, and was elected President of the Association of Professional Schools of International Affairs in 2009. He was also the Chair of the University of Minnesota’s Deans’ council and a recipient of the University’s Distinguished Service Award. From 2010 to 2012, Atwood was the member-elected Chair of the Development Assistance Committee of the Organization of Economic Cooperation and Development (OECD). Atwood led the U.S. Agency for International Development (USAID) during the Administration of President William Clinton. He earlier led the Clinton-Gore transition team at the State Department in 1992, and was Under Secretary of State for Management prior to his appointment as head of USAID. He received the Secretary of State’s Distinguished Service Award in 1999. During the Carter Administration Atwood was Assistant Secretary of State for Congressional Relations. In 2001, Atwood served on UN Secretary General Kofi Annan’s Panel on Peace Operations. He was legislative advisor for foreign and defense policy to Senator Thomas F. Eagleton (D–Mo) (1972 to 1977). Atwood was the first President of the National Democratic Institute for International Affairs (NDI) (1986 to 1993). He was a career diplomat before joining Senator Eagleton and later became Dean of Professional Studies and Academic Affairs at the Foreign Service Institute (1981-82). He is currently Chair of the Population Services International board, Vice Chair of the AFS Intercultural Programs board and a member of the board of the National Democratic Institute and of the Watson Institute Board of Overseers.