Devesh Kapur Book Adda – The Other One Percent: Indians in America 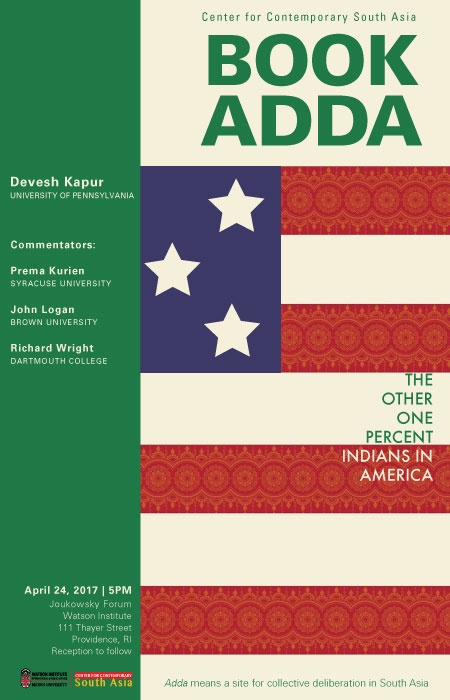 Adda means a site for collective deliberation in South Asia. This series features panel discussion of important new books written by our colleagues or those significantly involved with CCSA as intellectual interlocutors.  In this adda, experts will comment on Devish Kapur's The Other one percent: Indians in America. The author will then have time to respond before the floor is opened for questions from the audience.

The Other one percent: Indians in America tells one of the most remarkable stories of immigration in the last half century is that of Indians to the United States. People of Indian origin make up a little over one percent of the American population now, up from barely half a percent at the turn of the millennium. Not only has its recent growth been extraordinary, but this population from a developing nation with low human capital is now the most-educated and highest-income group in the world's most advanced nation.

The Other One Percent is a careful, data-driven, and comprehensive account of the three core processes-selection, assimilation, and entrepreneurship-that have led to this rapid rise. This unique phenomenon is driven by-and, in turn, has influenced-wide-ranging changes, especially the on-going revolution in information technology and its impact on economic globalization, immigration policies in the U.S., higher education policies in India, and foreign policies of both nations.

If the overall picture is one of economic success, the details reveal the critical issues faced by Indian immigrants stemming from the social, linguistic, and class structure in India, their professional and geographic distribution in the U.S., their pan-Indian and regional identities, their strong presence in both high-skill industries (like computers and medicine) and low-skill industries (like hospitality and retail trade), and the multi-generational challenges of a diverse group from the world's largest democracy fitting into its oldest.