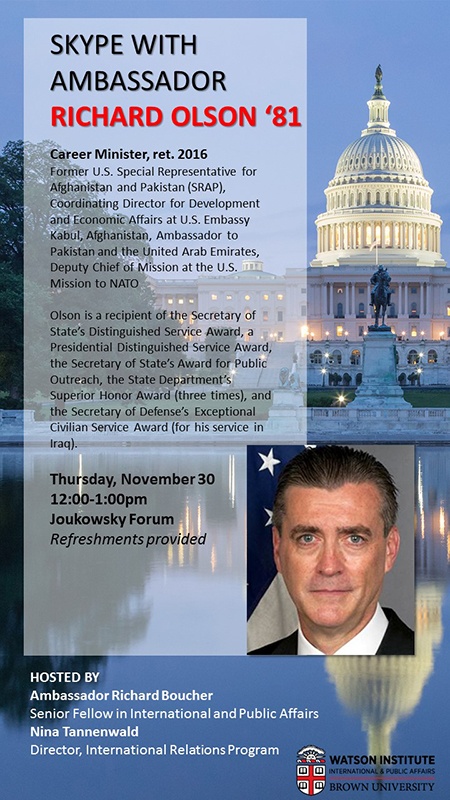 In this new series, three high-level and distinguished former U.S. career diplomats will pay a “virtual” visit to the Watson Institute via Skype. They will present reflections on current global issues and diplomacy, and then engage in a discussion with the audience via Skype.

Ambassador Richard Olson retired from the U.S. Foreign Service in November of 2016 with the rank of Career Minister. His final assignment was as U.S. Special Representative for Afghanistan and Pakistan (SRAP). From 2012 to 2015 he was the U.S. Ambassador to Pakistan. Olson served as the Coordinating Director for Development and Economic Affairs, at U.S. Embassy Kabul, Afghanistan, from 2011 to 2012. U.S. Ambassador to the United Arab Emirates from 2008 to 2011. Olson joined the U.S. Department of State in 1982 and served in Mexico, Uganda, Tunisia, Saudi Arabia, Ethiopia, the United Arab Emirates (both Abu Dhabi and Dubai), and in Najaf, Iraq. He was also Deputy Chief of Mission at the United States Mission to the North Atlantic Treaty Organization (NATO). His Washington assignments included: State Department Operations Center (twice), NATO Desk, the Office of Israel and Palestinian Affairs (twice, including as Director), and the Office of Iraqi Affairs, including as Director. Olson is a recipient of the Secretary of State’s Distinguished Service Award, a Presidential Distinguished Service Award, the Secretary of State’s Award for Public Outreach, the State Department’s Superior Honor Award (three times), and the Secretary of Defense’s Exceptional Civilian Service Award (for his service in Iraq). He was awarded the medal of Wazir Akbar Khan by President of Afghanistan Ashraf Ghani. He graduated from Brown University in 1981, receiving an A.B. in Law and Society (Honors) and History.