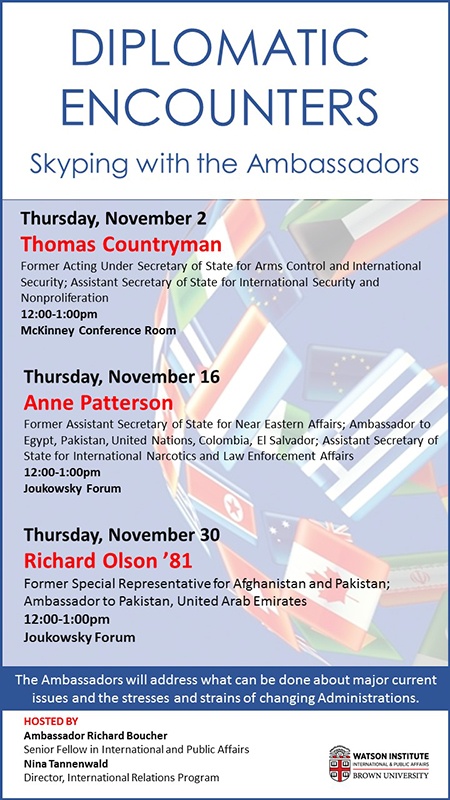 In this new series, three high-level and distinguished former U.S. career diplomats will pay a “virtual” visit to the Watson Institute via Skype. They will present reflections on current global issues and diplomacy, and then engage in a discussion with the audience via Skype. 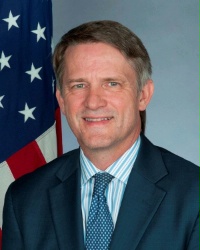 Thomas Countryman is a career diplomat who served as Acting Under Secretary of State for Arms Control and International Security (2011 – 2017)---the highest international security position in the State Department----and Assistant Secretary for International Security and Nonproliferation (2011 - 2017). Prior to his position as Assistant Secretary, he served as the Principal Deputy Assistant Secretary for Political-Military Affairs, Deputy Assistant Secretary for European Affairs, and as the Foreign Policy Advisor to the Commandant of the U.S. Marine Corps. From 1994-1997, he was responsible for advising Ambassador Albright on Middle East affairs at the U.S. Mission to the United Nations, and served as liaison with the UN Special Commission investigating Iraq’s weapons programs. From 1997 to 1998, Mr. Countryman served as Director for Near East and South Asian Affairs on the National Security Council staff, with responsibility for the region stretching from Morocco to Syria, and serving as the White House representative on Ambassador Dennis Ross’ peace process team. From 2001 to 2005, he was the Minister-Counselor for Political Affairs at the American Embassy in Rome, Italy. He served as Deputy Chief of Mission at the U.S. Embassy in Athens, Greece from 2005 to 2008, including as the Chargé d’Affaires for five months in 2007. Mr. Countryman graduated from Washington University in St. Louis (summa cum laude) with a degree in economics and political science, and studied at the Kennedy School of Government at Harvard University. His foreign languages are Serbo-Croatian, Arabic, Italian, Greek, and German.