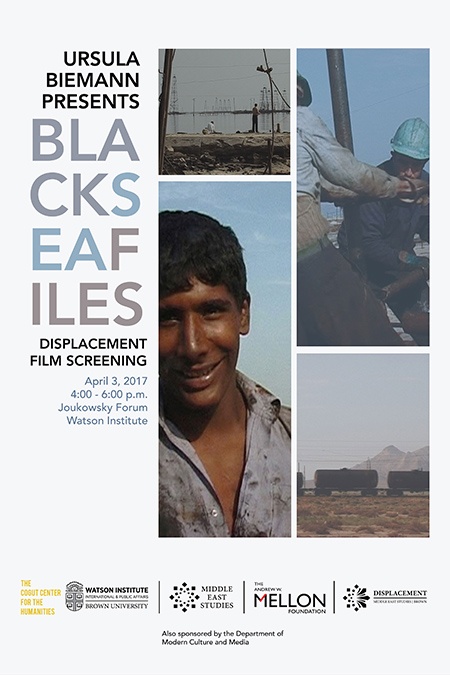 Screenings presented by the artist, Ursula Biemann. The presentation introduces Black Sea Files (2005), a territorial research on the Caspian oil geography and the gigantic new pipeline that pumps crude oil through the Caucasus. Oil workers, farmers, refugees and prostitutes who live along the pipeline come into profile and contribute to a wider human geography that displaces the singular and powerful signifying practices of oil corporations and oil politicians. Drawing on investigatory fieldwork as practiced by anthropologists, journalists and agents of secret intelligence, Black Sea Files comments on artistic methods in the field and the ways in which information and visual intelligence is detected, circulated or withheld. With the consecutive screening of part 3 of the more recent Egyptian Chemistry (2012), examining the River Nile and its hydro-engineering, Biemann moves from human geography to ecology and metaphysics as a form of engaging and ordering the material world.

This is the first in a three-part series:

Co-sponsored by the Cogut Center for the Humanities, the Department of Modern Culture and Media, and Middle East Studies. This series is funded by a generous grant from the Andrew W. Mellon Foundation.

Ursula Biemann (born 1955, Zurich, Switzerland) is an artist, writer, and video essayist. Her artistic practice is strongly research oriented and involves fieldwork in remote locations where she investigates climate change and the ecologies of oil and water. She works the findings into multi-layered videos by connecting the micropolitics on the ground with a theoretical macro level, proposing a reflexive exploration of planetary and videographic organization.