Displacement Film Screening of The Sahara Chronicle with Ursula Biemann 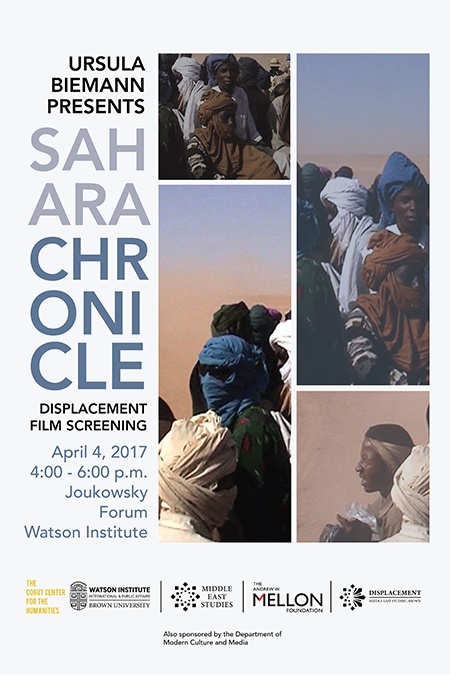 Transit migration through the Sahara is a large-scale collective experience that is best understood in its systemic dimension. Highly adjustable, these movements have generated prolific operational networks, systems of information and social organization among fellow migrants as well as interaction with local populations. The long-term video research Sahara Chronicle (2006-2009) works with a notion of geography both as social practice and organizing system. Diverting the attention from the present fascination with power geographies and repressive border regimes, her video investigations explore the counter-geographies constituted by undercover operating systems, innovative practices of resistance and migratory self-determination. Entering clandestine, off-track and virtual spaces, Ursula Biemann presents an art practice that visualizes a counter-geography of the Sahara, suggesting ways in which artists may inscribe themselves in these symbolic and material spaces.

The screening presents 7 of the 12 videos constituting the open anthology of Sahara Chronicle (50’).

This is the second in a three-part series:

Co-sponsored by the Cogut Center for the Humanities, the Department of Modern Culture and Media, and Middle East Studies. This series is funded by a generous grant from the Andrew W. Mellon Foundation.

Ursula Biemann (born 1955, Zurich, Switzerland) is an artist, writer, and video essayist. Her artistic practice is strongly research oriented and involves fieldwork in remote locations where she investigates climate change and the ecologies of oil and water. She works the findings into multi-layered videos by connecting the micropolitics on the ground with a theoretical macro level, proposing a reflexive exploration of planetary and videographic organization.