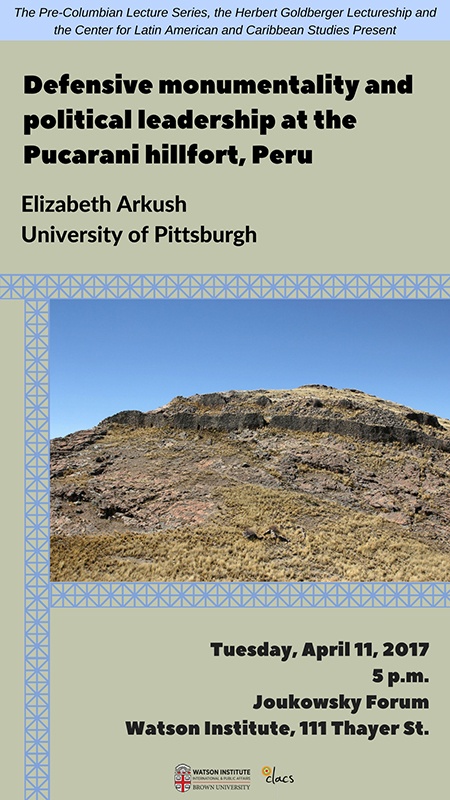 Archaeologists have argued that some early religious monuments were built without permanent central leadership, raising important questions about the nature of collective action and the integration of large populations in communal tasks. I suggest that large-scale defensive architecture, when viewed as a form of monumentality, can contribute to these discussions. Evidence is presented from an archaeological investigation of defensive architecture and social organization at Pucarani, a major hillfort settlement in the Lake Titicaca Basin of Peru dating to the Late Intermediate Period (LIP AD 1100 - 1450). In this politically tumultuous time span after the collapse of the Tiwanaku state but before the rise of the Inca empire, the Titicaca basin was dominated by large hillfort towns (Arkush 2011). Pucarani is the single largest hillfort documented to date in my multi-year investigations of 49 such sites in the northern and western Titicaca Basin, and its defensive walls are the largest by far. What kind of political leadership and social organization produced this magnificent site? Our results show that a short burst of defensive wall construction required planning and coordination, but also was accomplished in very heterogenous styles. While quite visually imposing, the walls required a labor input that was very manageable for the large resident population.  Surface architecture suggests social organization into several large corporate groups, with one group of especially high status. The evidence from Pucarani speaks to the nature of political leadership in the LIP in the south-central Andes, and the capacity of defensive communities to organize and accomplish collective endeavors in the face of threat.

Co-sponsored with the Pre-Columbian Lecture Series