Felipe Loureiro – The Alliance for Progress for a Few? US Economic Aid to Brazil's States during the Administration of João Goulart (1961-1964) 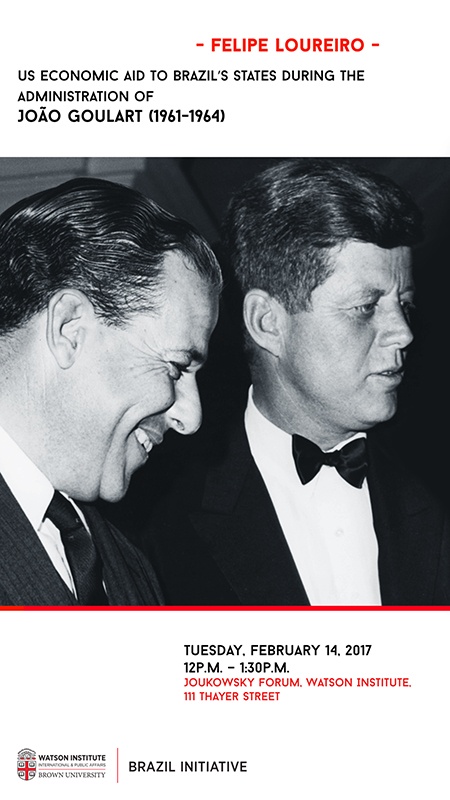 The presentation investigates the allocation of U.S. aid and Inter-American Development Bank (IDB) loans to Brazilian states during the government of João Goulart in Brazil (1961-1964). Scholars have long emphasized that John F. Kennedy's Alliance for Progress has employed state-by-state loans and grants as Cold War weapons to destabilize the Goulart regime, even though references on the subject were imprecise or based on few cases. U.S. officials have always denied such practices, claiming that aid was provided based on technical assessments. By using a broad range of sources, including a comprehensible database of U.S. and IDB dollar loans to Brazil’s states in the 1961-1964 period, the presentation points to their unequivocal political motivation. Washington clearly favored anticommunist and anti-Goulart governors in aid allocation, applying economic assistance to restrain Goulart’s power, set out a political alternative to the 1965 presidential elections, and constitute a coalition to collaborate in Goulart’s overthrow if it were needed. The presentation also claims that Brazilian governors played a crucial role in fostering and blocking U.S. state-by-state aid; and that Washington used assistance as a long-term instrument to stimulate a process of liberal capitalist modernization in Brazil, uprooting conditions for the proliferation of radical ideologies. The analyses of the patterns of U.S. state-by-state aid in Brazil shed light not only on how Alliance funds assisted to destabilize the country’s post-war democracy, but also contributes to a broader understanding of the Alliance for Progress in Latin America.