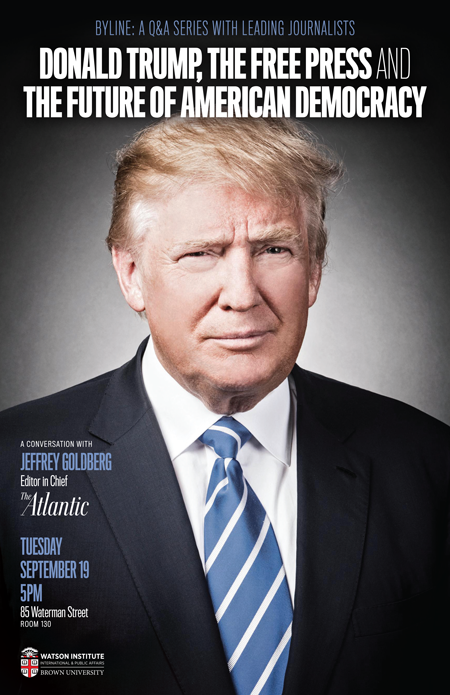 Edward Steinfeld, director of the Watson Institute, will lead a conversation with Jeffrey Goldberg, editor in chief of The Atlantic.

Jeffrey Goldberg is the 14th editor in chief of The Atlantic. Previously, Goldberg served as a national correspondent for the magazine, and earlier, he served as Washington correspondent, and Middle East correspondent, of The New Yorker. He is a recipient of numerous journalism prizes, including the National Magazine Award for Reporting, for his coverage of Islamist terrorism, and the Daniel Pearl Prize. Over the course of his career, he has interviewed numerous heads of state, including Presidents Barack Obama and George W. Bush, Israeli Prime Minister Benjamin Netanyahu, and Jordan's King Abdullah II. His reporting has taken him to Iraq, Iran, Pakistan, Sudan, Afghanistan, Syria and Lebanon. He is currently a Visiting Distinguished Fellow at the Carnegie Endowment for International Peace. He began his career at The Washington Post, and served for several years as a foreign correspondent for The New York Times Magazine. He is also the author of Prisoners: A Story of Friendship and Terror.