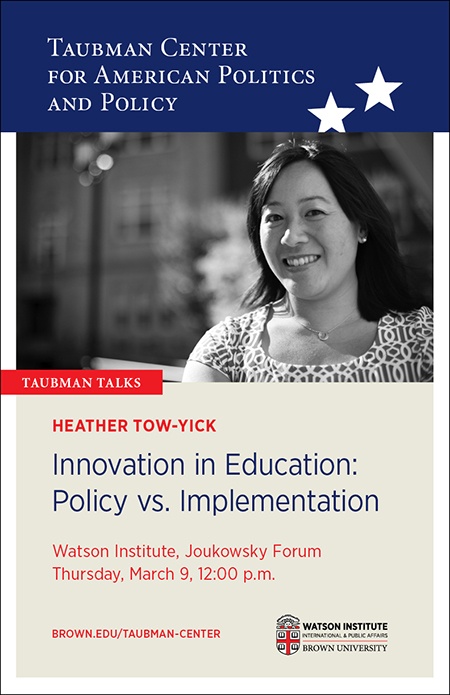 Heather Tow-Yick will speak about the role of a delivery unit in a central office for a school system. She will reflect on what she has learned since becoming the first Chief Transformation Officer of Providence Public Schools in June 2016. She will also discuss the role of innovation specialists in supporting central office transformation, the improvement of supports for schools, and the focus on the instructional core.

Tow-Yick has spent most of her career coaching and developing executive leadership at Teach For America (TFA). She founded the Rhode Island chapter of TFA and served as its first executive director. From 2003-2005, she worked as the special assistant to former New York City Schools Chancellor Joel Klein, and spent time as a strategy consultant with The Bridgespan Group. She started her career in education with TFA as a corps member in 1998 in the South Bronx, where she taught middle school English and U.S. History.

Tow-Yick currently serves on the Board of Directors for the Rhode Island Airport Corporation and The Moses Brown School. She is a graduate of Brown University, and holds a master’s degree from Columbia University Teachers College and a master’s in business administration from MIT’s Sloan School of Management.