Identity, Geopolitics and the Taiwan Strait 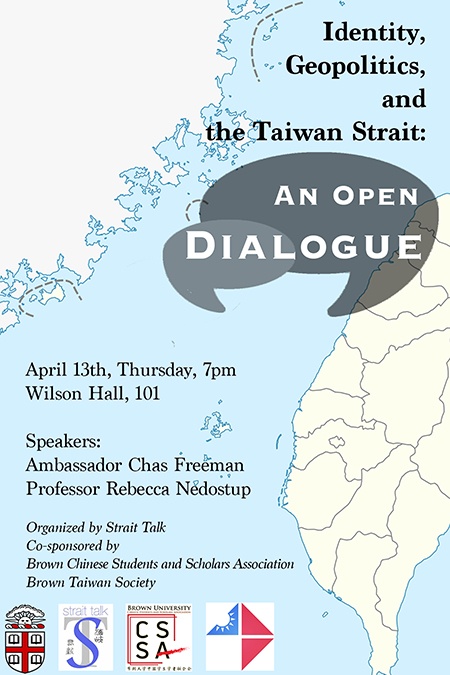 Strait Talk, in conjunction with the Brown Taiwan Society and the Chinese Student and Scholars Association, invites you to attend our open dialogue event about the intersection of identity and geopolitics across the Taiwan Strait.

The event will begin with two speaker presentations by Professor Rebecca Nedostup and former Ambassador Chas Freeman, followed by a Q&A and open dialogue with audience members. It will take place on Thursday, April 13th at 7pm in Wilson Hall room 101. Pizza from flatbread will be provided!

Rebecca Nedostup works at the intersection of politics, culture and society intwentieth century China and Taiwan. She is the author of Superstitious Regimes: Religion and the Politics of Chinese Modernity (Harvard Asia Center 2009), and is currently writing Living and Dying in the Long War: Tales of Displacement in China and Taiwan, 1937-1959. She is co-organizer and co-editor of the collaborative, interdisciplinary project "The Social Lives of Dead Bodies in Modern China." A second collaborative project, "The Field of the State in Modern China," draws on collective historical knowledge. Her research and teaching interests include war, mobilization, and displacement; the long-term effects of mass violence; state-building over the long durée and in comparative light; the theoretical and methodological issues raised by ritual and spatial analysis; and the place of the corporeal dead in historical study