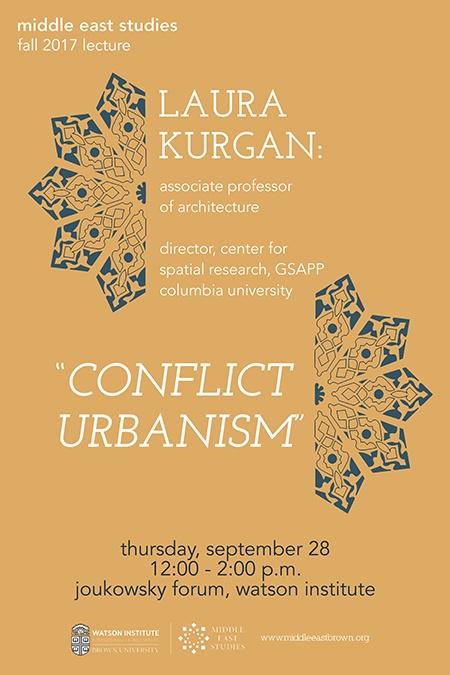 Lunches will be held until 12 p.m. and thereafter distributed on a first-come basis to those on standby.

Conflict Urbanism is a term that designates not simply the conflicts that take place in cities, but also conflict as a structuring principle of cities, as a way of inhabiting and creating multiple components of urban space, and even conflicting urbanisms. The increasing urbanization of warfare and the policing and surveillance of everyday life are examples, but conflict is not limited to war and violence. Cities are not only destroyed but also built through conflict. They have long been arenas of friction, difference, and dissidence, and their irreducibly conflictual character manifests itself in everything from neighborhood borders, to language, to differences of opinion and status, and to ordinary encounters on the street.

This lecture will be an overview of this multi-year research focus at the Center for Spatial Research through three lenses: the Memory of Destruction in Aleppo, Syria, Transitional Justice and Internal Displacement in Colombia, and the role of language in structuring urban space in Queens, New York City, where up to 800 languages are spoken. Most of the work has been done through the creation of maps as a language for spatializing incomplete data and narratives in order to document and archive and make visible urban conflict.

Laura Kurgan is an Associate Professor of Architecture at the Graduate School of Architecture Planning and Preservation at Columbia University, where she directs the Visual Studies curriculum and the Center for Spatial Research. She is the author of Close Up at a Distance: Mapping, Technology, and Politics (Zone Books, 2013). Her work explores things ranging from digital mapping technologies to the ethics and politics of mapping and the art, science and visualization of big and small data. Her work has appeared at the Cartier Foundation in Paris, the Venice Architecture Biennale, the Whitney Altria, MACBa Barcelona, the ZKM in Karlsruhe, and the Museum of Modern Art. She was the winner of the United States Artists Rockefeller Fellowship in 2009.

Made possible with generous funding from the Cogut Institute for the Humanities.