Manan Ahmed – A Conquest of Pasts 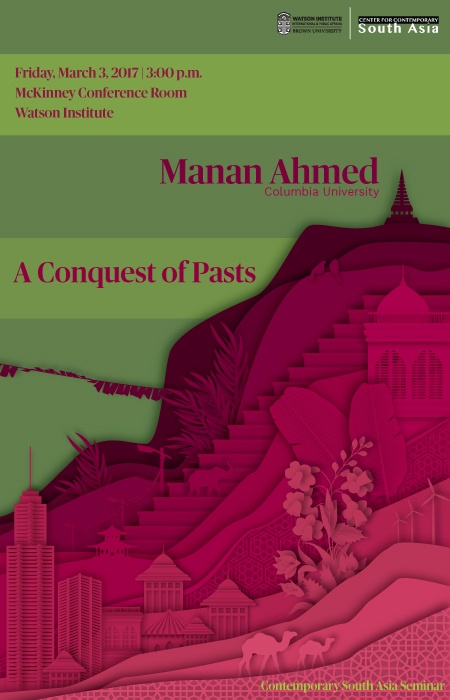 Manan Ahmed, Assistant Professor of History at Columbia University, is interested in the relationship between text, space and narrative. His areas of specialization include intellectual history of Islam in South and Southeast Asia; frontier-spaces and the city in medieval South Asia; colonial and post-colonial North India and Pakistan. His monograph, A Book of Conquest: The Chachnama and Muslim Origins in South Asia (Harvard University Press, 2016) is an intellectual history of a text— the early thirteenth century Persian history called Chachnama— and a place— the medieval city of Uch Sharif in southern Punjab, Pakistan. From the vantage point of that text and space, the book presents a vision of being Muslim in South Asia over this longue durée, while resisting the narratives of ‘foreign-ness’ and ‘otherness’ that assemble around the Indian Muslim subject. His current research is a comparative, global project that focuses on seventeenth century histories of conquest and their relationship to the emergence of “World History” (Weltgeschichte) in the nineteenth century. He is also finishing a book on space and memory of early modern Lahore.

He is involved in Digital Humanities projects-- and is the co-founder of the Group for Experimental Methods in the Humanities at Columbia. His work in Digital History focuses on spatial and textual understandings of medieval past— a recent collaborative project is "Delivering post by foot in medieval north India” and another project is based on digitization of manuscript materials.