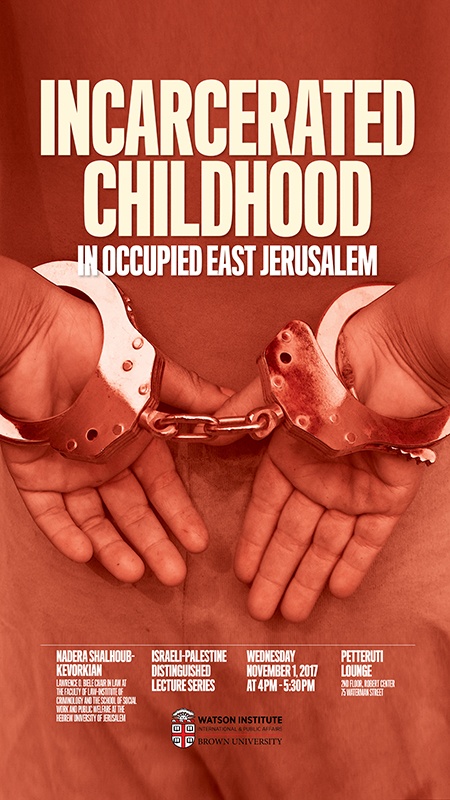 Based on three interrelated theoretical frameworks—institutional racism, settler colonialism and security reasoning ─ this talk examines child arrests in Occupied East Jerusalem (OEJ), addressing how the Israeli justice and law enforcement systems treat Palestinian children. The aim is to attain a complete theoretical and empirical understanding of the current criminological and socio-legal situation concerning children's access to justice in OEJ. The various empirical data gathered suggest that the settler colonial regime of control, with its security justifications and structural racism, is apparent not only in police reactions but also in the behaviors of most judges and their treatment of arrested OEJ children. The criminal justice system marks these children as demonized others. The talk will share the creeping effect of the securitized and racialized discourse into the Israeli criminal justice system, that justify settler-colonial logic over the child rights discourse, jeopardize the right to due process and furthers the suffering of children.

Professor Nadera Shalhoub-Kevorkian is the Lawrence D. Biele Chair in Law at the Faculty of Law-Institute of Criminology and the School of Social Work and Public Welfare at the Hebrew University of Jerusalem. She is a Palestinian feminist activist and the former director of the Gender Studies Program at Mada al-Carmel, the Arab Center for Applied Social Research in Haifa. Her research focuses on law, society and crimes of abuse of power. She studies the crime of femicide and other forms of gendered violence, crimes of abuse of power in settler colonial contexts, surveillance, securitization and social control, and children, settler colonialism, trauma and recovery in militarized and colonized zones. Shalhoub-Kevorkian’s previous book is entitled: “Militarization and Violence Against Women in Conflict Zones in the Middle East: The Palestinian Case Study” published by Cambridge University Press, 2010. Her newly published book is entitled: “Security Theology, Surveillance and the Politics of Fear”, published by Cambridge University Press, 2015. Shalhoub-Kevorkian is currently working on a new book manuscript examining Palestinian childhood.

As a resident of the old city of Jerusalem, Shalhoub-Kevorkian is a prominent local activist. She engages in direct actions and critical dialogue to end the inscription of power over Palestinian children’s lives, spaces of death, and women’s birthing bodies and lives.