NOTE DATE CHANGE TO 3/16 AT 3:00PM-Tom Segev ─ Ben-Gurion and the Arabs: The Price of Zionism 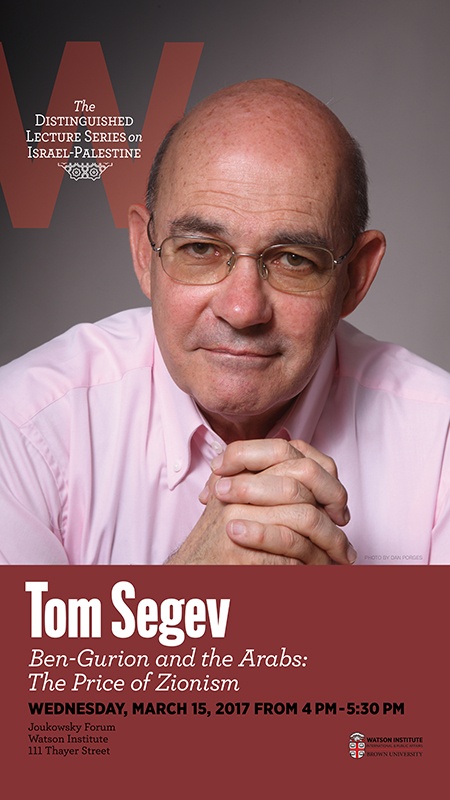 David Ben-Gurion, Israel's founding father and first prime minister, always maintained that the establishment of a Jewish state in Palestine should not cause any hardship to the local Arab population. He advocated an "alliance" between Jewish and Arab workers, promised full equality to Arab citizens of Israel, and frequently offered to travel to Arab capitals to negotiate peace. Ben-Gurion had his reasons for declaring hope, but his real views were far from optimistic.

In a new and groundbreaking biography, to be published in 2018, distinguished Israeli Historian and former Ha'aretz columnist Tom Segev points out that Ben-Gurion never seriously believed in real peace between Israel and the Arabs. Committed to the Zionist ideology since early childhood, Ben-Gurion always regarded national conflict and war in Palestine as the inevitable price of his ideology.

Most Israelis willingly accepted Ben-Gurion's declared belief in peace; they needed hope, especially after the Holocaust. But from war to war and following the collapse of the Oslo accords in the 1990's, more and more Israelis have come to conclude that at least for the foreseeable future the conflict will remain without solution.

Tom Segev is an Israeli historian and retired journalist. His weekly column was published for thirty years in Haaretz, Israel’s leading daily newspaper, and dealt mainly with history and human rights. He has contributed opinion articles to numerous newspapers including The New York Times. Segev's books have been published in 14 languages.