NPR's Corey Flintoff – Resurgent Russia in the Time of Trump 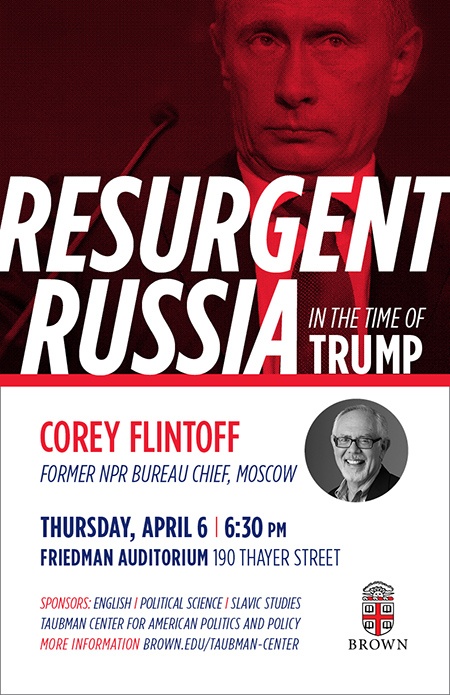 National Public Radio correspondent Corey Flintoff spent four years as NPR's bureau chief in Moscow, where he reported as Russian President Vladimir Putin cracked down on dissent, seized Crimea, and led Russia into war in eastern Ukraine. Since his recent return to the U.S., Flintoff has been following the revelations of the Trump administration's ties to Russia, and what that could mean for the future of relations between two of the world's most potently armed nations.

Flintoff will be joined on stage by Brown faculty — Jonathan Readey of the English Department, Linda Cook of Political Science/Slavic Studies and James Morone of the Taubman Center for American Politics and Policy — for a conversation about reporting on Putin's Russia and the evolving relationship between Russia and the U.S.

Corey Flintoff has spent nearly 40 years as a radio journalist, serving most recently as NPR’s correspondent in Moscow. He has covered the wars in Iraq, Afghanistan and Ukraine, the earthquake in Haiti, the revolution in Egypt and the revolution and civil war in Libya. Sponsored by: Taubman Center for American Politics and Policy Department of English Department of Political Science Department of Slavic Studies