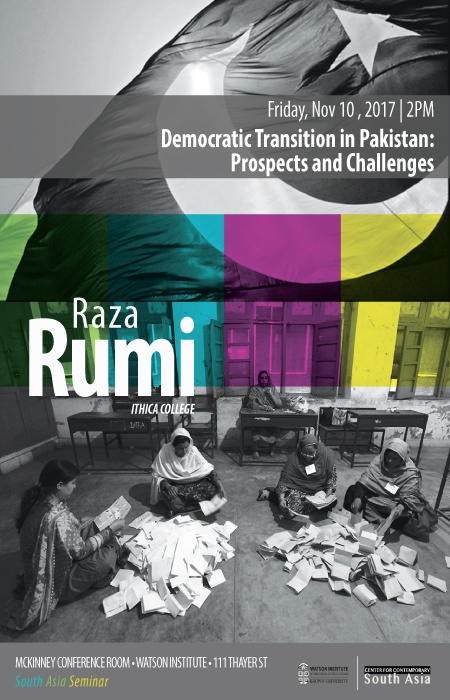 Raza Ahmad Rumi is a Pakistani policy analyst, journalist and an author. Currently, he is the editor, Daily Times and a regular columnist for leading publications in South Asia and beyond. He teaches at Cornell Institute for Public Affairs and Ithaca College, NY. Earlier, he was editor The Friday Times, Pakistan's foremost liberal weekly paper and a TV show host. Rumi was Director at Jinnah Institute, a public policy think tank and Executive Director of Justice Network- a coalition of NGOs. In March 2014, he survived an assassination attempt in which his driver lost his life. Within weeks, he left Pakistan. Since then he has been fellow at United States Institute for Peace, National Endowment for Democracy,  and Berkley Centre for Religion Peace and World Affairs at the Georgetown University. Prior to his foray in journalism, he worked for the Asian Development Bank as governance specialist and Pakistan Administrative Service. He is the author of 'Delhi by Heart', 'The Fractious Path: Pakistan's Democratic Transition and 'Identity Faith & Conflict'. His writings are archived at www.razarumi.com.