Rebecca Bell-Martin and Richard Snyder ─ Who is Safe? Varieties of Security in Providence, RI 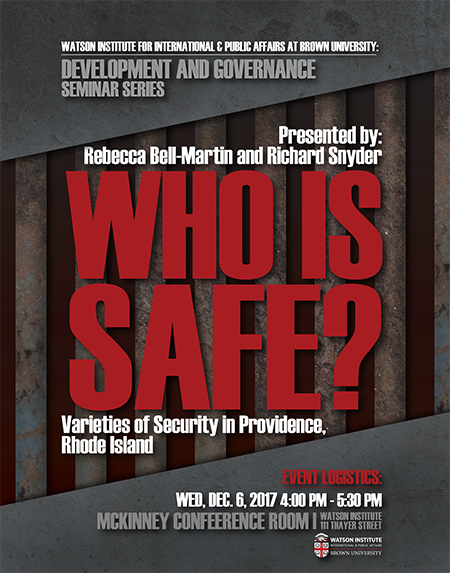 The public good of local safety can be provided by a host of public, private and community agents combining in a multiplicity of different ways. Even in a small American city like Providence, Rhode Island, we observe striking variation in the provision of local security across neighborhoods. To describe and explain these local varieties of security, we propose a multilateral, multilevel and subnational framework. In conjunction with new techniques for measuring the territorial distribution of security assets, such as the novel measures of policing disproportionality (POLDIS) that we introduce, the framework offers a far stronger understanding not only of “who is safe,” but also how and why.

Rebecca Bell-Martin is a PhD student in the Political Science Department at Brown. She studies comparative politics and international relations with special interests in Latin America. Her research agenda includes political violence, violent non-state actors, and political participation under conditions of physical insecurity. Her dissertation aims to explain variation in nonvoting forms of political participation in Mexico under conditions of insecurity associated with the “drug war.”

She earned her MA in International Studies from the University of Denver and her BA from Whittier College, where she triple-majored in Political Science, Cultural Anthropology, and Spanish Language.

Richard Snyder is a faculty fellow at the Watson Institute, a professor in Brown's Department of Political Science and the acting director of the Graduate Program in Development. He received his MA and PhD in political science from the University of California, Berkeley, and his BA in social studies from Harvard University.