Resistance to Black Genocide in the Americas 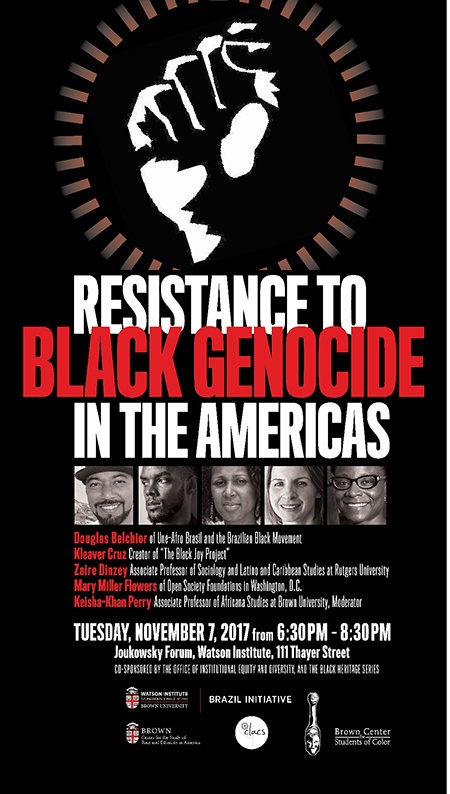 A four-person panel discussing resistance to Black genocide and the resilience of the Movement for Black Lives across the Americas including Douglas Belchior of Uneafro-Brasil and the Brazilian Black Movement, Kleaver Cruz, creator of The Black Joy Project and a member of the Black Lives Matter Chapter in New York, Zaire Dinzey-Flores, Associate Professor of Sociology and Latino and Caribbean Studies at Rutgers University; and Mary Miller Flowers of Open Society Foundations in Washington, D.C. Keisha-Khan Perry of the Department of Africana Studies at Brown University will moderate.

Kleaver Cruz is an Uptown native of NYC, a writer, dreamer and lover of travel. Kleaver is the creator of The Black Joy Project, a digital and real-world movement to center Black joy as a form of resistance. His work has been featured in La Galería and African Voices Magazine as well as on Vibe.com and the Huffington Post among others. He is an alum of the VONA/Voices of Our Nation Foundation's Emerging Writer's Workshop where he studied essay writing. Kleaver's activism work is diasporic and focuses both on the local here in the U.S. and with connecting struggles that people of African descent are experiencing around the world. He loves being Black, Queer, Dominican and the myriad of elements that comprise who he is with the understanding that they are all parts of a whole. Kleaver believes in the power of words because they allow him to write what did not exist when he needed it the most.

Zaire Z. Dinzey-Flores is an Associate Professor of Sociology and Latino &Caribbean Studies at Rutgers University. Her research focuses on understanding how the urban built environment mediates community life and race, class, and social inequality. Her book, Locked In, Locked Out: Gated Communities in a Puerto Rican City (University Of Pennsylvania Press: 2013), winner of the 2014 Robert E. Park for best book in urban and community sociology, investigates race and class inequality as negotiated through and codified in the architecture and community gates of public housing and private subdivisions. She is working on a few projects focusing on housing and neighborhood design in the United States and the Caribbean. Among them, is an examination of race and class distinctions in the production of urban residential spaces in real estate markets. She is a member of the Afro-Latin@ Forum, where she is collaborating on developing a survey to understand the experience of Afro Latin@s in the U.S.,. Dr. Dinzey-Flores also serves as a mayoral appointed Board Member for the New York City Housing Authority. She holds a Ph.D. in Public Policy and Sociology and a Masters in Urban Planning from the University of Michigan, a M.A. in Sociology from Stanford University, and a B.A. in Sociology from Harvard University.

Mary Miller Flowers is Associate Director for Justice with the Open Society Human Rights Initiative. She manages a global grantmaking and advocacy program focused on supporting civil society to combat the overuse of pretrial detention and increase access to legal aid for indigent criminal defendants. She also provides support to grant-giving programs focused on disability rights and freedom of information.

Keisha-Khan Y. Perry is currently an Associate Professor of Africana Studies at Brown University where she specializes in race, gender and politics in the Americas, urban geography and questions of citizenship, intellectual history and disciplinary formation, and the interrelationship between scholarship, pedagogy and political engagement. Her most recent work, Black Women against the Land Grab: The Fight for Racial Justice in Brazil (fall 2013, Minnesota Press), is an ethnographic study of black women’s activism in Brazilian cities, specifically an examination of black women’s participation and leadership in neighborhood associations, and the re-interpretations of racial and gender identities in urban spaces. This year as a Faculty Fellow at the Brown University Pembroke Center for Research and Teaching on Women, she is working on her next book project, Evictions and Convictions: The Gendered Racial Logic of Black Dispossession in New York City.