Sam Hickey ─ How Politics Shapes Development and Why This Matters: The Role of Incentives, Ideas and Coalitions 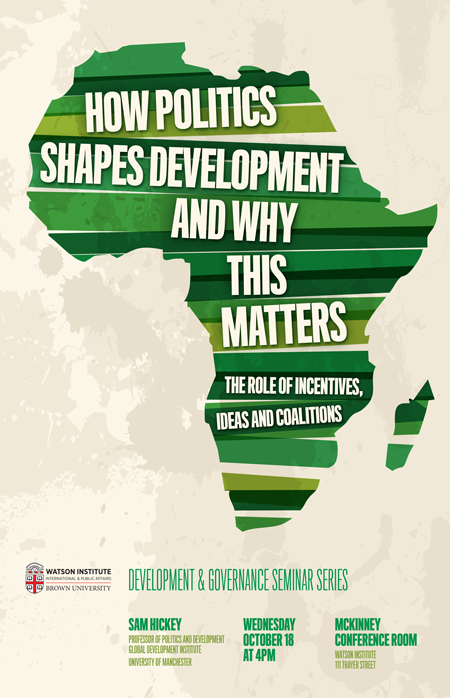 Why have so many governments in low-income countries, particularly in Africa, started delivering cash transfers and other forms of social protection over the past decade? Part of the answer lies in the efforts of international development agencies, which, catalysed by the contradictions of global capitalism and related ideological shifts, have deployed new modes of governmentality to promote such interventions. However, this ignores the role of national-level political agency and cannot explain why the levels of commitment and the capacity to deliver cash transfers varies between different countries in Africa. Nor can this variation be explained by relative levels of growth or democracy. Instead, we argue that the capacity and commitment to deliver social protection flows from the nature of a country’s ‘political settlement’, particularly the level of inter-elite competition, the broader configuration of power in society to which elites respond and the paradigmatic ideas that hold sway amongst ruling elites. Our finding that dominant ruling coalitions perform better than coalitions in more competitive settings raises difficult issues regarding whether or not cash transfers may become a new site of progressive politics in Africa (cf. Ferguson 2015). Although seen as heralding a shift towards new ‘social contracts’ in Africa, cash transfers are currently more strongly associated with the pursuit of legitimacy by dominant coalitions and the deployment of clientelism amongst others.

Sam Hickey is Professor of Politics and Development at the Global Development Institute, University of Manchester and joint Research Director (with Kunal Sen) of the Effective States and Inclusive Development Research Centre (www.effective-states.org). His work has been published in the leading journals in politics, development studies and African studies, and he has edited six collections, the most recent of which was The Politics of Inclusive Development: Interrogating the Evidence (Oxford University Press, 2015; with Kunal Sen and Badru Bukenya). His current research focuses on the politics of natural resource governance, social protection, women’s empowerment, state capacity (particularly in the form of bureaucratic pockets of bureaucratic effectiveness), and relational theories of social justice.