Scott Warren '09 – Educating for Democracy: The Prospects and Importance for Civics Education in the Era of Trump and Brexit 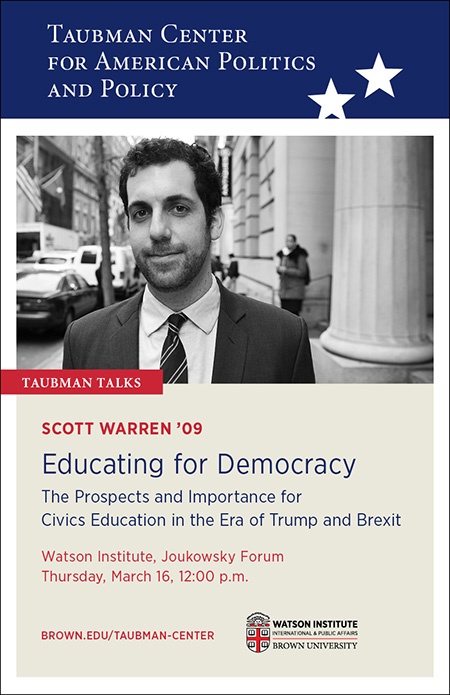 Scott Warren ’09, co-founder of Generation Citizen (GC), will speak about the ramifications of failing to educate the next generation of citizens and how GC is attempting to change the tide by working with schools to bring civics education back into the classroom. GC has worked with more than 40,000 students in six states, including recent moves to begin work in Texas and Oklahoma, and has become a national leader in the civics education space.

Scott Warren '09, co-founded Generation Citizen during his senior year at Brown and is currently its chief executive officer. During the spring semester, Warren is Social Entrepreneur in Residence at the Swearer Center, a position supported by the Taubman Center for American Politics and Policy. As part of his residency, he is teaching a course, Social Entrepreneurship, Policy, and Systems Change.

As a student at Brown, Warren was active in the movement to end the genocide in Darfur, Sudan, helping to lead successful campaigns to divest Brown University, the City of Providence, and the State of Rhode Island from companies conducting business in Sudan.

Click here for more events about the global shift to the political right.