Screening of Eskiya (The Bandit) 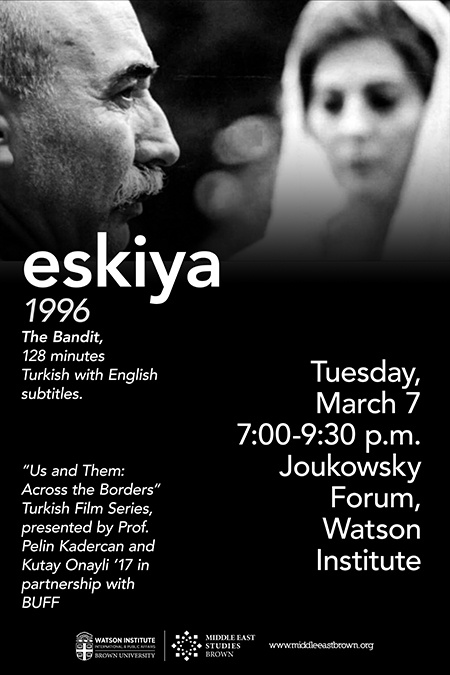 Refreshments will be provided

After serving a 35-year jail sentence, Baran (played by Şener Şen), an eşkıya (a bandit, a haydut in Turkish), is released from prison in a town in Eastern Turkey. When returning to the home village he witness the fact that the world has changed dramatically during those years, with the village itself underwater after the construction of a dam. Then he also finds out that the person who masterminded the betrayal that brought him to jail was Berfo (Kamuran Usluer), a friend who had once been closer to him than a brother. In order to snare Keje (Sermin Şen), Baran's sweetheart, Berfo seized his best friend's gold and had Baran arrested by the gendarmes on Mountain Cudi. Then Berfo purchased Keje from her father against her will, and disappeared. According to rumor, he is in Istanbul.

While traveling to Istanbul by train, Baran meets Cumali (Uğur Yücel), a young man. Cumali was raised in the alleys of Beyoğlu, his life revolving around bars, gambling joints, alcohol, dope and women. Cumali dreams of joining the mafia and making it big. He takes Baran to a dilapidated hotel in the backstreet's of Beyoğlu. After a while, Cumali and his friends discover that Baran used to be a bandit, but they can't take it seriously. Cumali's dreams of a new life include Emel (Yeşim Salkım), his girlfriend. Emel has a convict brother, Sedat (Özkan Uğur), who is in trouble with the other prisoners in his jail. His life is in danger, and he needs a high amount of money to get out. Cumali promises Emel to get the money for her brother as soon as possible. Thus, when he deals with a transport of drugs for the mafia, he steals a quantity, enough to secure the escaping of Sedat and also later to get him in trouble with Demircan (Melih Çardak), the mafia boss.

Meanwhile, the bandit is going through Istanbul in a daze, lost in a totally alien world, with no idea where to start looking for the woman he loves and the mortal enemy who has stolen her. After some days he happens to see Berfo on TV, now as a powerful businessman with the name changed.

Part of the Turkish Film Series. In partnership with the Brown University Film Forum.