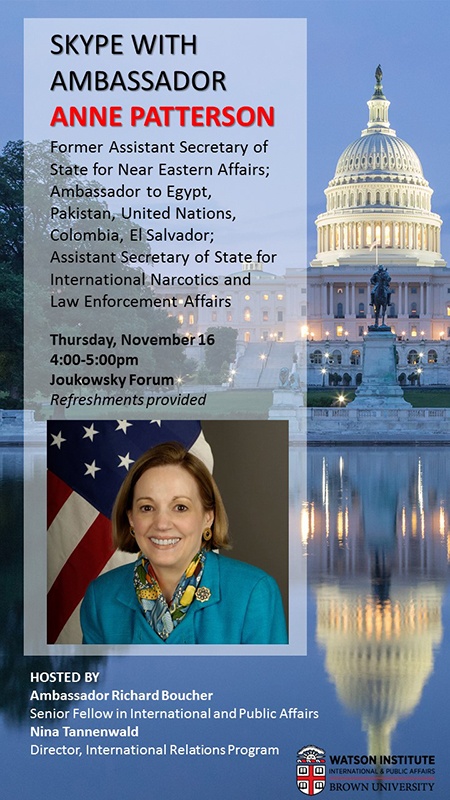 Former U.S. career diplomat Anne Patterson will pay a “virtual” visit to the Watson Institute via Skype. She will present reflections on current global issues and diplomacy, and then engage in a discussion with the audience.

Ambassador Anne W. Patterson is a career diplomat who most recently served as Assistant Secretary of State for Near Eastern Affairs. Prior to returning to Washington for this assignment, Ambassador Patterson served as United States Ambassador to Egypt (2011-2013) and as Ambassador to Pakistan (2007-2010). She has served the State Department as Assistant Secretary of State for International Narcotics and Law Enforcement Affairs, Deputy Permanent Representative at the U.S. Mission to the United Nations, and as the State Department’s Deputy Inspector General. She has held a variety of other economic and political assignments, including in the Bureau of Inter-American Affairs, the Bureau of Intelligence and Research, and the Bureau of Economic and Business Affairs. She has also served as Ambassador to Colombia (2000-2003) and as Ambassador to El Salvador (1997-2000). She received the Department's superior honor award in 1981 and 1988, its Meritorious award in 1977 and 1983, and a Presidential honor award in 1993. She has also received the Order of the Congress, from the Congress of Colombia, and the Order of Boyaca, from the Government of Colombia, and was also recognized by the Government of El Salvador with the Order of Jose Matias Delgado. In 2008, Ambassador Patterson was promoted to the rank of Career Ambassador, the highest rank in the Foreign Service. She has been awarded the Secretary of State’s Distinguished Service Award twice, in 2008 and 2010, the Ryan Crocker Award for Expeditionary Diplomacy in 2010, and was named one of Foreign Policy magazine’s Top 100 Global Thinkers in 2011. A native of Fort Smith, Arkansas, Ambassador Patterson graduated from Wellesley College and attended graduate school at the University of North Carolina.