Trump versus the Media: The Challenges of Covering the President 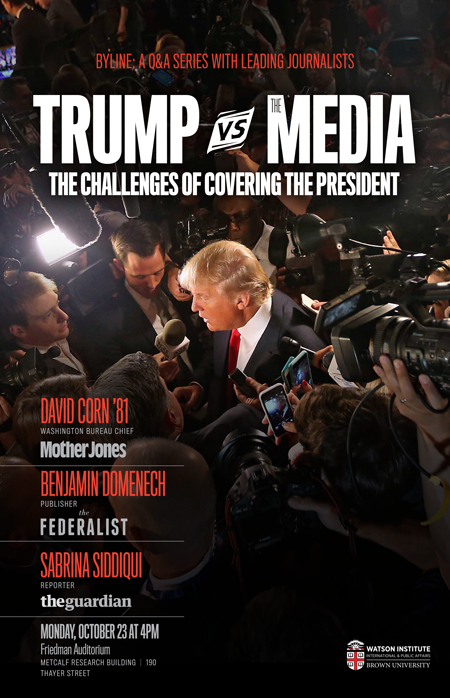 Benjamin Domenech is the publisher of The Federalist, host of The Federalist Radio Hour, and writes The Transom, a daily subscription newsletter for political insiders. He was previously a fellow at The Manhattan Institute and a senior fellow at The Heartland Institute; editor in chief of The City, an academic journal on faith and culture; and a speechwriter for HHS Secretary Tommy Thompson and U.S. Senator John Cornyn of Texas. He co-founded Redstate and co-hosted Coffee & Markets, an award-winning economic podcast. His writing has been published in The Wall Street Journal, The Daily Beast, Politico, Commentary, Reason, and GQ, and he appears regularly on Fox News, MSNBC, CNN, and CBS's Face The Nation.

Sabrina Siddiqui is a political reporter at The Guardian, where she covers the Trump administration and national politics. While at The Guardian, Ms. Siddiqui covered the 2016 presidential race as a member of the traveling press for the campaigns of both Hillary Clinton and Marco Rubio.

Previously, she was a congressional reporter at The Huffington Post, where she also covered the White House and 2012 presidential race. Ms. Siddiqui got her start in the industry working on the White House desk at Bloomberg News after graduating from the Medill School of Journalism at Northwestern University.

She is a CBSN contributor, frequent analyst on MSNBC and CNN, and a contributing host on The Bill Press Show.