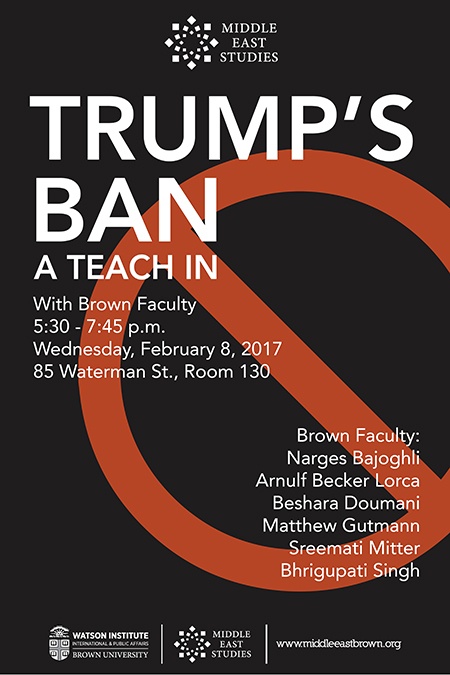 President Trump’s executive order on refugees and immigrants has profound and long-term global implications, not just to Muslim majority societies and U.S. social and political life. The purpose of this teach-in is to inform students and colleagues about the international legal dimension, to humanize the impact of the ban on people all over the world, and to think comparatively across the Middle East, South Asia, and Latin America.

Narges Bajoghli is a Postdoctoral Research Associate at the Watson Institute at Brown University. She is a socio-cultural anthropologist and her research focuses on pro-regime media in Iran. In addition to her academic writing, Narges has also written on Iran for The New York Times Magazine (Learning to Play by Ear in Iran, Tipsy in Tehran), The Guardian, The Washington Post, Al Monitor, ​Middle East Research and Information Project (MERIP), The Huffington Post, and LobeLog, and has appeared as a guest commentator on DemocracyNow!, NPR, BBC WorldService, PBS NewsHour, BBC Persian, and HuffPost Live.

Organizing efforts in the Middle Eastern American community around the #MuslimBan, and the potential challenges the community and its allies may face in the coming months.

Arnulf Becker Lorca is a Visiting Faculty at the International Relations Program at Brown University. He received his SJD from Harvard Law School. His book, Mestizo International Law: A Global Intellectual History, 1842–1933, published in 2015 by Cambridge University Press was the winner of the 2016 Book Prize of the European Society of International Law.

Arnulf Becker will explain the basic elements of the international refugee regime and will highlight not only how the ban violates international obligations, but also how this regime and international law in general has shaped if not in part produced the refugee crisis.

Beshara Doumani is the Joukowsky Family Professor of Modern Middle East History and Director of Middle East Studies at Brown University.  He works on the social, economic, and legal history of Eastern Mediterranean. Doumani is also a public intellectual who writes on current events in the Middle East, on the ethics of knowledge production, and on the relationship between culture and politics. He led a team that produced a strategic plan for the establishment of a Palestinian museum, and recently received the Sawyer Seminar award from the Andrew W. Mellon Foundation for his proposal, “Displacement and the Making of the Modern World: Histories, Ecologies, and Subjectivities.”Doumani joined Brown after fourteen years at the University of California, Berkeley, but he is no stranger to the East Coast. He received his PhD from Georgetown University, and was first tenured at the University of Pennsylvania. Doumani was a Fellow at the Woodrow Wilson International Center for Scholars, the Wissenschaftskolleg zu Berlin, and the Radcliffe Institute for Advanced Study.

Will speak to: TBA

Matthew Gutmann is Professor of Anthropology, PSTC (Population Studies and Training Center) faculty, Director of the Brown International Advanced Research Institutes,, and Faculty Fellow at the Watson Institute. Most of his ethnographic research has been conducted in Mexico, where he is a visiting professor at Colegio de México, and China, where he is a visiting professor at Nanjing University. He has also conducted collaborative research on United Nations Peacekeepers in Haiti and Lebanon. From 2009 to 2013, he was Vice President for International Affairs at Brown, leading the University’s efforts to build collaborations and exchanges with leading institutions around the world and major programs relevant to internationalization. Gutmann has a Master’s in Public Health, and in 2008 he won the Eileen Basker Memorial Award for the best scholarly study on gender and health. He has also been a visiting professor in China, France, Mexico, and Spain. Gutmann’s undergraduate major was modern and classical Chinese.

Will speak to:“The Whitelash, the Wall, and the Brown Peril: Impartial is not an Option”

Sreemati Mitter is the Kutaiba alGhanim Assistant Professor of Middle Eastern History and International and Public Affairs at Brown University. She is completing her first book, entitled “A History of Money in Palestine: From the 1900s to the Present.” Her work examines the economic and monetary dimensions of statelessness. Her broader academic interests include the economic, social, and political history of the modern Middle East.Will speak to:

What is the process through which a refugee gets asylum in any country other than his/her own? Who are the Syrian refugees I have worked with (on asylum requests in France)? Who is a refugee? Is there a difference between a refugee and a migrant? Why do “they” want to come to America?

Bhrigupati Singh completed his PhD in anthropology at Johns Hopkins University in 2010 and is currently an assistant professor of anthropology at Brown and a faculty fellow at the Watson Institute.He has published numerous articles on issues of religion, politics, media, and popular culture, in journals including Cultural Anthropology, American Ethnologist, and Contributions to Indian Sociology. His recent book, titled Poverty and the Quest for Life: Spiritual and Material Striving in Contemporary Rural India (University of Chicago Press, 2015), was awarded the Joseph W. Elder Prize in the Indian Social Sciences. He is the co-editor of The Ground Between: Anthropological Engagements with Philosophy (Duke University Press, 2014), and serves as an associate editor of HAU: Journal of Ethnographic Theory. This year he will continue a newer and emerging set of projects: a book of essays with the working title What Comes After Postcolonial Theory?, and a longer-term ethnographic research project that grows out of his PhD research in north and central India, on religious and secular forms of healing for “common mental health disorders” in urban north India, specifically focusing on the urban poor, and on anxiety disorders as a window into contemporary India. He will be on research leave for the academic year 2015-2016, conducting this ethnography based in Delhi, with grants from the Wenner-Gren Foundation for Anthropological Research (2015) and the American Institute of American Studies (2016).