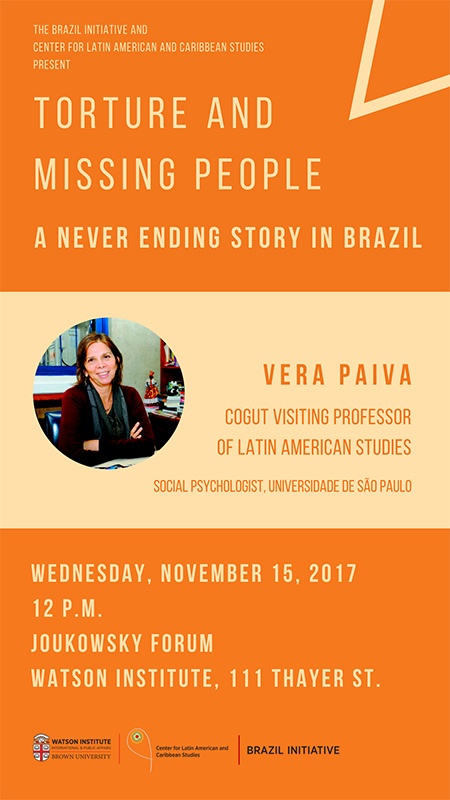 Turning points in history depend on symbolic challenges that offer new interpretations, provide new understanding of everyday life, tell new stories about the past changing peoples and the cultural scenario. As in personal trajectories, turning points also depend on this mode of psychosocial intervention that produces collective projects, and eventually, impact policies, politics and structures.

The Memory and Truth Commission about the “military dictatorship”, installed by President Dilma Roussef, was one turning point that impacted the political process we are living in Brazil since 2012.

An important outcome of the Commission was the multiplication of autonomous investigations and parallel initiatives, as the installment of smaller commissions at state level, cities, institutions. Young generations were involved in short but efficient investigations of the violence committed, for example, against native Brazilians that were tortured, put in prisoners camps, killed, to open their territory to agribusiness; important projects also remembered the horrible story of the 60000 people, that were killed for more than two decades in the Hospital Colônia de Barbacena/Minas Gerais, most without any mental health diagnosis, arriving by train and disappearing forever, known as the “madhouse holocaust”.

As Paiva will discuss in this presentation, the main symbolic challenge was the link stablished between the yesterday terror and the today state violence: the never ending the never ending support for a mental health policy that incarcerate people, even after a quite progressive Health Reform as we see now in her city towards hundreds of homeless and drug users; the never ending military police violence and torture even in police precincts, the never ending illegal arrests, all disproportionally affecting and killing black youth, LGBT people, indigenous and traditional communities, almost 3 decades after the inauguration of the institutional democracy”. Since 2015 this violent scenario got worse and the extremist and violent defenders of torture, homophobia, sexism and racism has grown to almost 30% of voters. Is the military dictatorship legacy becoming a never ending story?

Democracy and the democratic culture is built and sustained everyday, by every and each new generation.