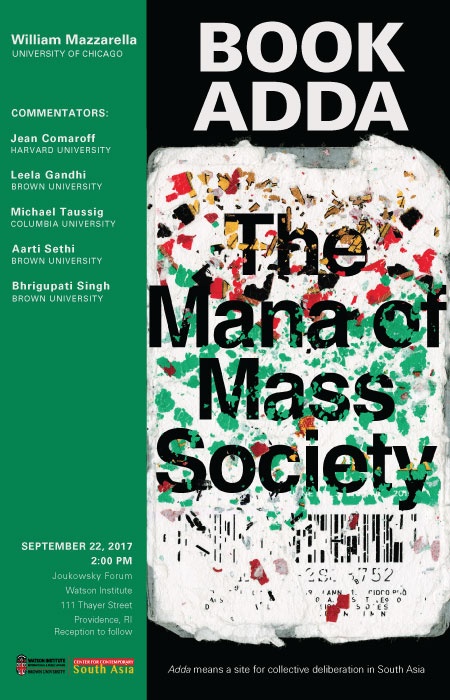 We often invoke the “magic” of mass media to describe seductive advertising or charismatic politicians. In The Mana of Mass Society, William Mazzarella asks what happens to social theory if we take that idea seriously. How would it change our understanding of publicity, propaganda, love, and power?

Mazzarella reconsiders the concept of “mana,” which served in early anthropology as a troubled bridge between “primitive” ritual and the fascination of mass media. Thinking about mana, Mazzarella shows, means rethinking some of our most fundamental questions: What powers authority? What in us responds to it? Is the mana that animates an Aboriginal ritual the same as the mana that energizes a revolutionary crowd, a consumer public, or an art encounter? At the intersection of anthropology and critical theory, The Mana of Mass Society brings recent conversations around affect, sovereignty, and emergence into creative contact with classic debates on religion, charisma, ideology, and aesthetics.

William T.S. Mazzarella, Department Chair, Neukom Family Professor of Anthropology and of Social Sciences at the University of Chicago, writes and teaches on the political anthropology of mass publicity, with special reference to India. His books include Shoveling Smoke: Advertising and Globalization in Contemporary India (Duke, 2003) and Censorium: Cinema and the Open Edge of Mass Publicity (Duke, 2013). He is also the co-editor, with Raminder Kaur, of Censorship in South Asia: Cultural Regulation from Sedition to Seduction (Indiana, 2009), and the editor of K D Katrak: Collected Poems (Poetrywala, 2016). His recently completed book, The Mana of Mass Society (Chicago, 2017), brings classic anthropological writings on magical efficacy and charismatic agency into conversation with critical-theoretical takes on marketing, aesthetics, and the commodity image. Please visit https://chicago.academia.edu/WilliamMazzarella for a sampling of Dr. Mazzarella’s publications.

Adda means a site for collective deliberation in South Asia. This series features panel discussions of important new books written by our colleagues or those significantly involved with CCSA as intellectual interlocutors.