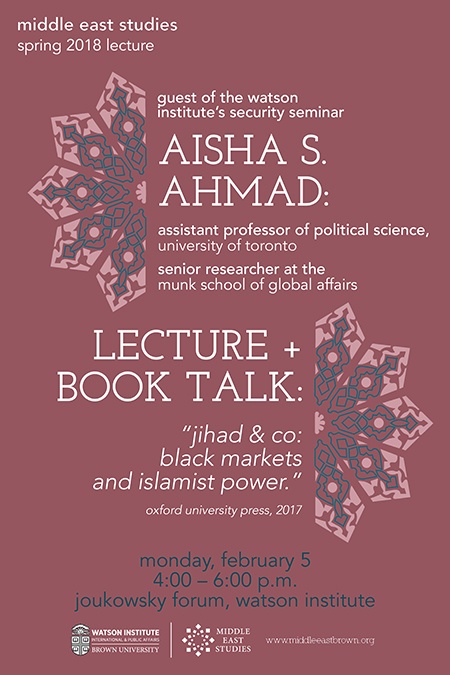 The rise of militant jihadist groups is one of the greatest international security crises in the world today. In civil wars across the modern Muslim world, Islamist groups have emerged out of the ashes, surged dramatically to power, and routed their rivals on the battlefield. From North Africa to the Middle East to South Asia, these jihadist groups have seized large swaths of territory and consolidated political control over disparate ethnic and tribal communities. Out of the most broken and ungovernable places on earth, they have built radical new proto-states out of enduring anarchy.

Why have some ideologically-inspired Islamists been able to build state-like polities out of civil war stalemates, while many other armed groups have failed to gain similar traction? What makes jihadists win? In Jihad & Co., Aisha Ahmad argues that there are concrete economic reasons behind Islamist success. By tracking the economic activities of jihadist groups in Afghanistan, Somalia, Pakistan, Mali, and Iraq, she uncovers an unlikely actor in bringing Islamist groups to power: the local business community.

To illuminate the nexus between business and Islamist interests in civil war, Ahmad journeys into war-torn bazaars to meet with both jihadists and the smugglers who financed their rise to power. From the arms markets in the Pakistani border region to the street markets of Mogadishu, their stories reveal a powerful economic logic behind the rise of Islamist power in civil wars. Behind the fiery rhetoric and impassioned, ideological claims is the cold, hard cash of the local war economy. Moving readers back and forth between mosques, marketplaces, and battlefields, Ahmad makes a powerful argument that economic savvy, as much as religious fervor, explains the rise of militant jihadism across the modern Muslim world.

Aisha Ahmad is an Assistant Professor in the Department of Political Science at the University of Toronto, and a Senior Researcher at the Munk School of Global Affairs. She has conducted field research in Afghanistan, Pakistan, Somalia, Kenya, Mali, Lebanon, and the U.A.E., and is a former fellow of the Belfer Center for Science and International Affairs at the Harvard Kennedy School. Her research is published in leading scholarly journals such as International Security and Security Studies.