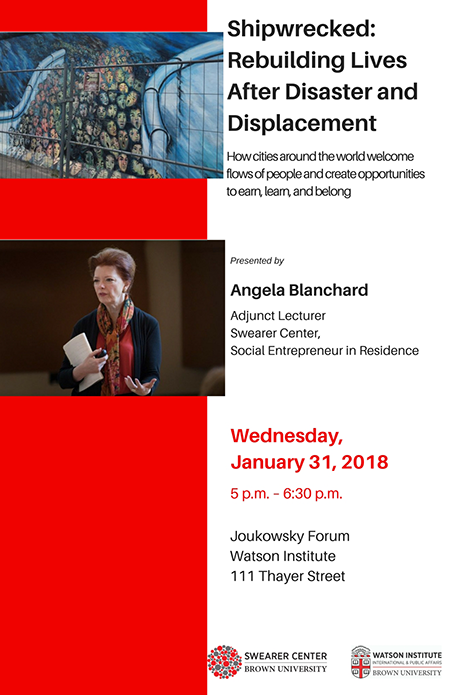 This is a practitioner story. Over a decade ago, we responded in Houston to Katrina by welcoming over 200,000 neighbors to Houston. Since that time I have been on a quest to understand the very best of practical, regionally based responses to displaced people. I do not distinguish between people displaced by war and political oppression and those cast out of their homes by fire and flood. Because our role and our responsibilities did not differ based upon where people came from or what tossed them ashore. The challenge was the same; to find a way to make them a part of the unfolding regional story. To search relentlessly for what worked best after disaster and displacement. This search and response carried us through multiple waves of incoming refugees and immigrants, allowed us to respond to multiple floods and hurricanes. And resulted in invitations to places from Brisbane to Amman. Hamburg to Charlottesville. Because everywhere --- there are people arriving in cities holding aspirations to earn, learn and belong.

Angela Blanchard, is a globally recognized expert practitioner in community development, disaster recovery, and effective long-term integration for immigrants and refugees. As CEO of BakerRipley, the largest community development organization in Texas, Blanchard’s breakthrough strategies have successfully revitalized neighborhoods in Houston, while providing a powerful model for cities across the globe. Frequently sought out by international nonprofit organizations and government leaders, her innovative, strength-based framework- Appreciative Community Building - has set the new standard for integrating diverse populations into thriving communities.

She has received numerous accolades, including the prestigious Heinz, three invitations to the White House, and extensive press coverage She’s been featured in the New York Times, Wall Street Journal. and Fast Company magazine named Blanchard one of the most creative people in the nation.

She is a Nonresident Senior Fellow in the Centennial Scholar Initiative at the Brookings Institution and serves on the Board of the Business Innovation Factory and the James A. Baker III Institute for Public Policy at Rice University. For the Spring 2018 semester, Blanchard is serving as a Taubman Fellow and Social Entrepreneur in Residence at Brown University.