Art at Watson presents The Displaced Language of Mesopotamia 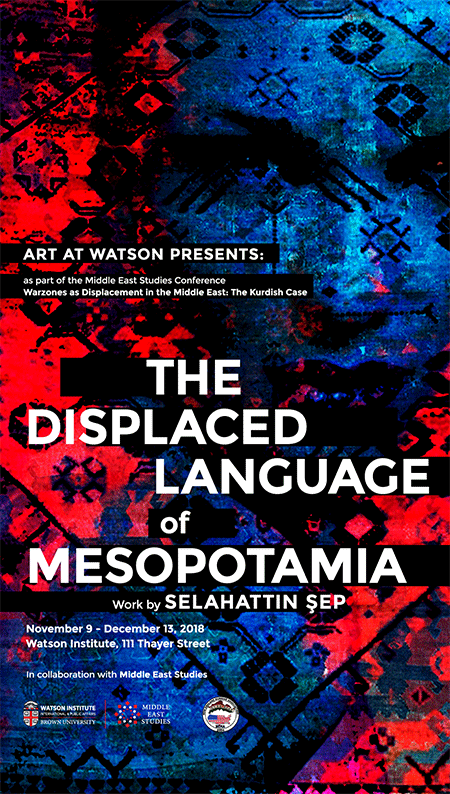 Interview with the Artist

This exhibition presents the mysterious stories of Mesopotamian Women. This secret and symbolic language traces to eastern mythology’s influence on how women relate with symbols found in nature. Chosen symbols are designed to create an aesthetic language, woven with and throughout their lives. Women keep these diaries in carpets, body tattoos, and carve them on to stone, to record their place in society, personal stories, and deepest emotions. This aesthetic symbolism will bring you closer to the lives of these women.

Conceptual text from The Displaced Language of Mesopotamia

Selahattin ŞEP is a Kurdish visual artist from the Kurdish city of Diyarbakir, in Southeast Turkey. He makes painting, sculpture, installation, video and photography. He uses his art to react to his life experiences. Diyarbakir and its people have been victim to cultural and direct violence for more than one hundred years. As a Kurdish artist, Selahattin sees his art as a tool to shed light on the plight of the Kurds and bring global awareness to social issues.

Selahattin has held 12 solo exhibitions and over 25 joint exhibitions throughout Turkey, Armenia, Italy, Poland and Morocco. His work is exhibited at the Turkish Tourisim and Cultural Ministry Museum in Ankara, Turkey, MOCAK Contemporary Art Museum in Krakow, Poland, the Museum of Mariam and Eranuhi Aslamazyan Sister in Gyumri, Armenia and The Big Marrakesh Hotel Collection in Marrakesh, Morocco. He was awarded the 2012 Turgut Pura Foundation for painting, and the 2015 Turkish Ministry of Culture Şefik BURSALI art competition winner. In 2006, along with seven other people, Selahattin helped to create Cegerxwin Art Academy and Aram Tigran Art Academy, independent universities for arts and culture in Diyarbakir. These universities offered free courses and materials and opened their doors with support to handicapped as well as child workers within the city.  In 2017, both Cegerxwin Art Academy and Aram Tigran Art Academy were violently taken by the Turkish government as the Kurdish municipality was dissolved.

Selahattin believes that art has had a strong influence on his character both emotionally and politically.  Art has helped him to create empathy for all of humanity, and has given him strength politically, because it has allowed him a sense of freedom. Selahattin recently relocated to Rhode Island, with his wife and their son, and continues his art.